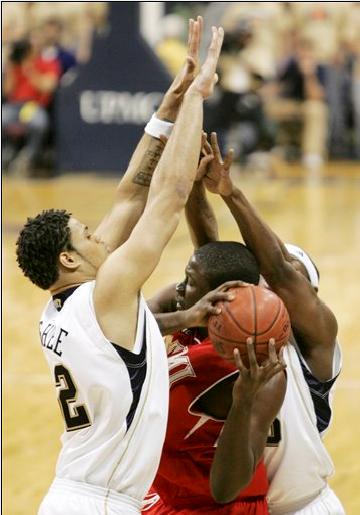 So there was a bevy of games on the slate last night. For those of you looking for some drama and hoping for something like Miami of Ohio following up their effort against UCLA--well nothing of the like really happened. Pittsburgh turned it on in the 2nd half and steamrolled those Red Hawks, UCONN scored two more points in the 2nd half than their opponent put up in the entire game, and Stephen Curry is doing his best to extinguish any doubt that moving to point guard will prevent him from scoring points, dismantling a trifling JMU squad. Villanova also put up an impressive 107 points to annihilate Fordham. Er scratch that...Fordham would struggle against Division III teams, they're atrocious

The closest game on the Top 25 scoreboard was Georgetown (probably on auto-pilot) with a nine point win over Jacksonville. Boring.

Yes, I (Nick) am aware that it appears I am purposely overlooking Sunday's Duke-URI outcome, where Jimmy Baron nearly single-handedly snapped the Blue Devils 62 game home non-conference winning streak. My response...this time of the season is like Spring Training: If you win, great. If you lose...well it's just Spring Training. Right? RIGHT? Anyone?

Anyways we're looking forward to the first big matchup of the season...UNC and Kentucky. The Wildcats still suck but at least it's a "brand-name." Tyler Hansborough is still out with that injury, so we won't need a big bottle of Aleve handy just to watch the entire 40 minutes of play.