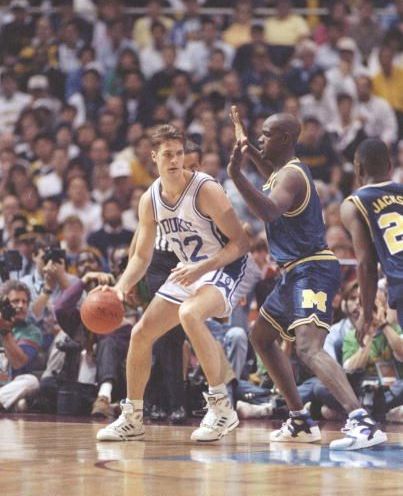 Oh yes, the nostalgia is hitting us


Michigan was able to hold off the stingy Bruin’s to get their first win against a Top 5 team in 11 years. The win was propelled by Deshawn Sims 18 points and Manny Harris’ 15 points.


Big Blue needed this victory in many ways. It ushered in new head coach John Beilein, by way of West Virginia…and no, it wasn’t a package deal with Rich Rodriguez. Also, this win should ease the pain of the Michigan faithful, since their football team is an abysmal 3-8. And finally, it is Ohio State weekend, so they will only have 36 hours to enjoy this massive victory before their football team is disassembled in C-Bus like a dog chewing on a nyla bone.


The win for Michigan sets up a final in the Garden with against Duke, who ironically so, was the last Top 5 team Michigan beat (1997 #1 Duke). The Blue Devils beat Southern Illinois on Thursday night, 83 – 58.


So maybe the Wolverines will get to celebrate once more, before the big football game.

Down in the 51st state, Xavier, Memphis, and Virginia Tech win as favorites, and Seton Hall comes up with a minor upset over USC. Those four winners move on to tomorrow's semi-finals in the Puerto Rico Tip Off. Is it just us or can you almost guarantee nine Big East teams in the big dance? Wow. Anyways, it will be X-A-V, IER facing VA Tech and, by process of elimination, the Tigers against the Pirates.