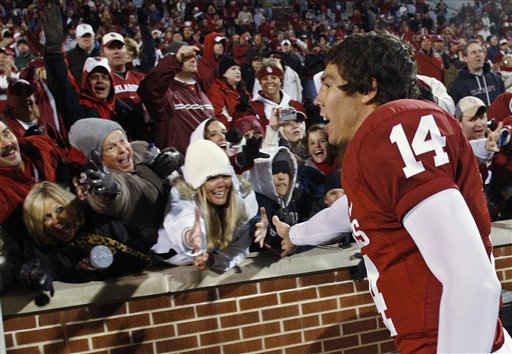 Sam Bradford now has a strong case for the Heisman

The Oklahoma Sooners created a three way tie for the Big 12 South with their impressive 65-21 beat down of #2 Texas Tech on Saturday night in Norman, Oklahoma. So now that Texas beat Oklahoma, Texas Tech beat Texas and Oklahoma beat Texas Tech, the water gets a little murky. Do not forget that there is still one week left in the season and all three teams don't play "roll-overs."

Oklahoma travels to hostile Stillwater for the Bedlam Game.

Everyone seems to be looking past Chase Daniels (one of Preseason favorites for Heisman) and his Tigers from Missouri, who await whichever team floats to the top of the Big 12 South. Nothing is a given.

In the Big 10, Penn State rolls on Michigan State, 49-18 in State College. Everyone gets a rose!!! When do we get rid of that? We think someone killed that whole Sports Illustrated Cover pic. With the win the Nittany Lions assured themselves a trip to Pasadena for the Rose Bowl, with a possible rematch against Oregon State and NOT Southern California; Oregon State traveled to Penn State on September 6th, 45-14 Nittany lions. If Oregon State takes care of business next week at home vs. the #24 Oregon Ducks, then they are in the Rose Bowl and USC will be in another BCS game (thank goodness, we don't know if we can stand another Big 10 vs USC game in Pasadena for the Trojan Invitational).

I (Matt) officially am done talking about Notre Dame, I'll quietly hang to every snap of the football in which they are involved but you will no longer need to listen to me...until they show me something (at USC next week, wouldn't that be nice?)