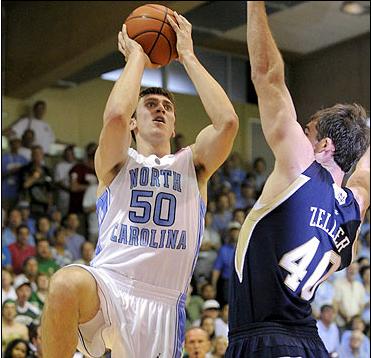 So much for that injury, Hansborough looked sharp out in Maui

We're guessing that you didn't spend last night sitting in a well lit living room, sipping on a couple beverages complimented by some sort of vegetable spread, tending to your dog, and watching the few decent games on in solitude. No, we're guessing you had to keep monitoring the televisions on mute while navigating through cramped bars full of high school "has beens" and "never weres." Biggest bar night of the year but it's always fun though, we think.

While you were catching up, partaking in "stop and chats" that you wish never had to happen, UNC made the Irish look like Charlie Weis was coaching them. Tyler Hansborough put up 34 points, while after the game Roy Williams said his star center is playing at only about 75 percent. Ass holes.

Staying in Maui, Indiana did manage a two point victory over host Chaminade in the seventh place game. Phew! You can credit Tom Crean's staff on that victory. Great advance scouting guys!

In NYC, Blake Griffin, the second best player in the country, led his Sooners over a good UAB team, Ya granted the Blazers blew the lead at the end, but they have talent in a lame Conference USA. We're not sure if this news made it back to Norman, as attention is strictly on the Bedlam game. Nonetheless, they'll face Purdue in the NIT Season Tip-Off finals.

If you're eyes are hurting from the awful football the NFL is giving to us on this sacred day, we noticed that ESPN2 has all the first round games of the Old Spice Classic. Feel free to switch over.

Now if you'll excuse us we need to go watch the Macy's Thanksgiving Day Parade back to bed.