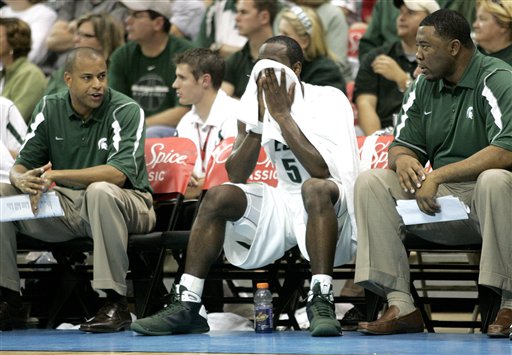 Fear the Turtle? There's been nothing of the kind for the latter part of this decade, but Gary Williams' kids just raised their fans expectations for the season with a convincing T-Giving win over Michigan State. The game went back and forth until about midway through the 2nd half, right when we woke up from a nice nap. Maryland was running away with the game and Gervais Vasquez was running around desperately seeking attention and affirmation from anyone in the building. We love the enthusiasm, but frankly he's annoying.

So should we expect this to serve as foreshadowing for what's going to go down in the ACC / Big 10 Challenge next week? We were really looking forward to UNC - Michigan State, but that excitement is quickly dissipating. Anyone think there is an audience for ACC / MAC Challenge next season? Not to embarrass Raymar Morgan but Dave Neal, a four year Terripan bench warmer, had more points (17) than minutes Morgan logged in the game (14). Somewhere, Tom Izzo is scratching his head wondering what happens next.

In the second game of the night session down in Disney, Gonzaga showed their "length"--,said Jay Bilas, in a nice win over Oklahoma State. Kidding aside, this team has the personnel to outscore nearly any team in the country, and we probably should of included them in our preseason Top 10. Despite his reliance on the undershirt, Austin Daye is a pretty good player who can beat you in a number of different ways, and Jeremy Pargo dribbles around the court with the tenacity of an angry bull.

So Maryland now plays Gonzaga, with Tennessee meeting Georgetown on the other side of the bracket. Sorry though, we got nothing on the Vols and Hoyas, too busy eating. We'll try and multi task better next time.