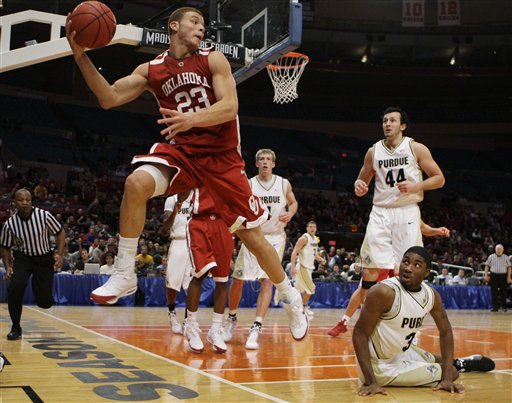 Blake Griffin: All-American, bully who throws balls at his peers

It's only the Preseason NIT, but it might carry more weight than its sister tournament held in March. Oklahoma took home the trophy tonight over Purdue. Blake Griffin adds more hardware to the Blake and Taylor Griffin trophy mantle, taking home Tournament MVP honors.

It's no secret that freshman in Madison Square Garden can get a little caught up in the moment, and we saw that in this game. Down 83-80 with nine seconds left, Purdue's Freshman PG Lewis Jackson froze in the middle of the lane like a early teenage boy forced to slow dance. He panicked and threw the ball directly out of bounds, which ensured victory for the Sooners.

We've got to think this infuriated Purdue's Namanja Calasan, a guy we're already handicapping as the "2031 Suburban Indianapolis Adult Men's League MVP." After playing his bum off the entire game and getting slapped around by the better Griffin, he has to settle for some sort of moral victory. For the record, since he's really good, let's note that Griffin put up 18 and more importantly had 21 "window cleans."

Down in Disney Tennessee and Georgetown put on a shooting clinic, essentially playing 40 minutes of L-A-K-E-B-U-E-N-A-V-I-S-T-A-F-L-O-R-I-D-A (that's 'Horse' but much longer, obviously) before the Vols finished off the Hoyas, 90-78. Both teams shot over 50 percent from the field but the Vols just made more of 'em, and got the victory. Props to ESPN for breaking the Lane Kiffin new hire story during a Tennessee basketball game. Always love to have something like this provoke John Sciambi into a conversation with Fran Fraschilla about his Heisman favorite. We'd rather hear Dicky V talk about the Tampa Bay Rays, or even his analysis of President elect Barack Obama naming his cabinet. That's just our take.

Tennessee now will meet Gonzaga in the finals. The Bulldogs brought Gary Williams and his Maryland Terrapins back down to earth, after they took down Sparty of Michigan State in the quarterfinals. Maryland never led in this game so there's no point in overanalyzing. Maryland's consolation prize: We're not really sure.