Share All sharing options for: Searching For: Harold Arceneaux

Considering our blog title gives a shout out to a once promising Syracuse guard gone astray, we figured it would be a good idea to keep the nostalgic juices flowing from time to time and give you that "oh wow I remember him" feeling. We will be dishing out some write-ups on former players; ranging from the All-American type who didn't have the "NBA Body," to one-hit-wonders who played their best when it mattered most...March. Feel free to pass along your favorite forgotten college basketball players, as we compile a list of prospective guys to feature in the future.

If you were given and able to retain the nickname "The Show", you know that somewhere, at some juncture in your life, you were pretty effing sweet. While its been nearly 10 years since Harold Arceneaux was front and center in the college basketball world, serious enthusiasts can immediately reference the game that made Harold, well, heralded. It was 1999, Seattle's Key Arena, first round of the NCAA tournament. Number three seed UNC, a mainstay among college basketball's elite, versus #14 seed Weber State, champions of the Big West. UNC hadn't lost a 1st round NCAA tournament game in nearly two decades. Surely, it would be business as usual for them as they looked to make another run to the Final Four. 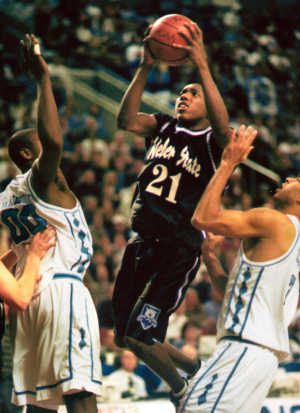 Not so fast my friends. Harold Arceneaux would have none of that mainstream America thinking. In his first season of DI ball (he spent two years at JuCo Midland), Arceneaux averaged 23 points a game while shooting 51 percent from the field. Surely any sort of game plan the Tar Heels put together centered around stopping Arceneaux, but whatever was thought out before tip off would not throw the 6' 6" forward for a loop. "The Show" went off for 36 points in the game, dropping 20 in the second half. He connected on five of seven three pointers, and sealed the game for the Wildcats with clutch free throws in the end of regulation. An instant classic that sent Tar Heel fans into shock, and was the lead sports story across the country.

A one hit wonder? Maybe. But the ride didn't quite end there because let's not forget, there was still a second round game to play. Looking to ride the momentum wave, Weber State squared off against Florida with the Sweet Sixteen now a legitimate destination. Arceneaux stuffed the stat sheet once again, disregarding the notion that the secret was out and the party was over. He put up 32 points and forced overtime, carrying his entire team and the entire Weber State student body with him. This time however, reality prevailed and the upstart Gators would advance.

Even though Acreneaux had one year of eligibility left, many assumed he would look to cash in with his stock so high and test the NBA waters. He went against that thinking and instead returned to Ogden, Utah, for his senior season, hoping to find magic once again. Unfortunately the good times could not be unearthed a second time around. With new players and a new coaching staff the Wildcats got off to a slow start. They finished the season at 18-10, not good enough for an NCAA tournament bid.

From there, as we've seen so often in college basketball, Arceneaux stock fell tremendously and he failed to get drafted that Summer. Since then he's bounced around from country to country, playing in various international leagues while continuing to impress as a proficient scorer. He even had a stint with the CBA's Great Falls Explorers, a team Billy Edelin once verbally agreed to play for but couldn't be found at the airport.

For the most part though, Harold Arceneaux serves as a name that represents all that is right with the NCAA tournament. A player who was able to captivate the common fan and even the common person fascinated with Davids defeating Goliaths.