Share All sharing options for: Searching For: Ed O'Bannon


While Ben Howland is lauded by fans and alumni for restoring order to the UCLA basketball program, he's still yet to bring a title to Westwood. You have to go back to 1995 where Jim Harrick--a convicted cheater for the record--manned the sidelines for one of the most complete championship teams we can think of. It was a team that on the whole was much greater than the sum of its parts. No player found long term success in the NBA and only a few even found short term success. But they did go about eight deep, and had a Wooden Award winning go-to-guy...

Nicknamed "Ed-O," Ed O'Bannon was the focal point of the Bruins high-powered offense. Evidence is in the 30 points and 17 rebounds he posted in the championship game against Arkansas, which easily earned him Final Four MVP. 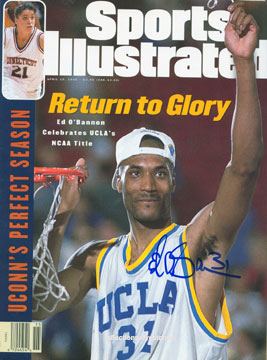 While O'Bannon was unquestionably the best player in college basketball that season, there were still the skeptics who were not sure his skills could translate over to the NBA. Despite this, O'Bannon was selected 9th in the draft by the New Jersey Nets. He got a nice signing bonus and guaranteed cash, but the highlights pretty much stopped there.

O'Bannon struggled to find his place within the rotation, spending three seasons essentaily chilling on the Nets and Mavericks bench. He wound up as a throw in as part of a trade to the Magic and was immediately released, ending his time in the NBA. After bouncing around various European teams and withstanding a few knee surgeries, O'Bannon lost his desire to play the game. To put it bluntly, he said: "I guess I wasn't as good as I thought I was."

Now the story could end there, and we guess it still sort of does. But don't worry about Ed O'Bannon, as he's still living the good life. He lives in Las Vegas, constantly asking apprehensive consumers...What is it going to take to get you in this Scion today?

After accruing just under four million dollars in the NBA, O'Bannon has traded in his Converse's for loafers, wielding a business card that reads: "Findlay Toyota and Scion - Sales and Leasing."

While he seems like a pretty content individual, O'Bannon attributes his basketball demise to lack of confidence, telling LA Times writer Bill Plaschke , "I missed shots, [and] got pulled from games. It affected my defense, and I lost all my confidence.''

Yes, in the big picture, Ed O'Bannon is really no more than another college basketball star gone awry. A guy who was never "NBA Ready." But he's got one more national championship ring than any of us. And he probably still sports it while driving driving down the Vegas strip in a fuel-efficient Camry Hybrid.