Eric Devendorf does well with women

Share All sharing options for: Eric Devendorf does well with women 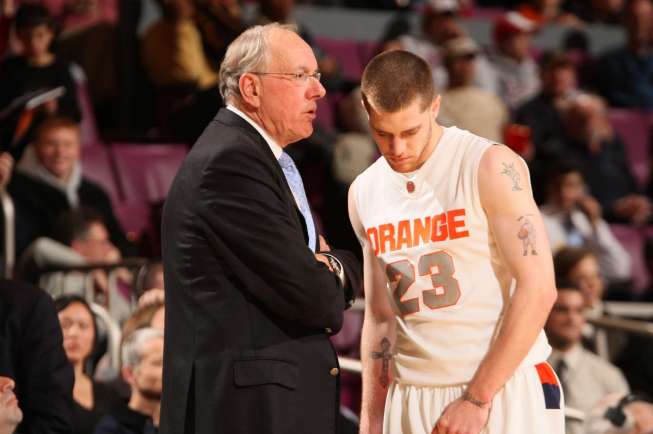 We wonder if Boeheim ever whispered a 'what the hell were you thinking?'

Things have been looking dandy for Syracuse basketball fans this season. An 8-0 start coupled with a #17 ranking, a pair of solid non conference victories over Florida and Kansas, and assistant coach Bernie Fine is looking healthy.

However, bowel movements may soon hit the dehumidifier, as the hammer is being brought down in the case of Eric Devendorf and Syracuse co-ed Kim Smith.

Wednesday night, a university judicial board has determined the Orange swingman should be suspended, drawing from Smith's claim she made early November 1st to campus police.

Apparently Smith and Devendorff are MySpace friends, and there was drama. We're thinking someone probably changed their relationship status or something. This then resulted in Devendorf and his entourage surrounding Smith's Hyundai Elantra on Halloween night, kicking it until she popped out of the car. When she confronted the crew, she was allegedly met by the closed fist of Mr. Devendorf. He also is reported to have called her a sexually promiscuous female dog, one that belonged on her knees.

Coach Jim Boeheim told ESPN Wednesday that Devendorf's status on the team will not change until he has been formally been suspended by the school.

The suspension has come down from the same administration that went to bat for Devendorf in front of the NCAA back in September, to grant him one more year of eligibility. Expect an appeal to be filed, which will then be reviewed in the next 10 days by the 'Cuse bigwhgs.