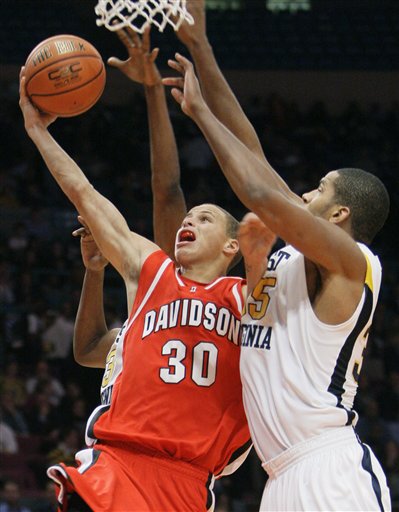 Four things were made apparent tonight at MSG:

Yes, Davidson pulled off another attention grabbing victory with Curry providing the last minute heroics once again. You saw it coming. He couldn't of been more off with his shot for the first 38 minutes, but it was just for effect and Curry flipped on the switch for the last two minutes, sealing West Virginia's fate, 68 - 65.

We shouldn't look past the fact the Mountaineers were a fairly depleted unit tonight. No Joe Mazzoula and no Alex Rouff, which you can attribute their lackluster 33 percent from the field. They did get 24 points and 14 rebounds out of emerging star The Da' Sean Butler-- who looked stellar in-person, according to our correspondent who was on hand.

The night cap proved to be very uneventful. Texas was clearly the better team, teasing the 'Cats all game long, but pulling away to win 67 - 58. AJ Abrams did his part in the cause, again, with 18 of his 26 coming in the second half. Had Texas shot free throws "granny style," the 'Horns might have finished off 'Nova midway through the second half.

Now we love this event, and the Jimmy V speech never gets old. But we don't understand why it's not a true tournament, because Curry vs. Abrams would be appointment television.