Share All sharing options for: Ben Woodside: A free-throw assassin

You don't know him, and in all honesty, you probably won't need to get to know him after reading this post. But just so we're covering all our bases here, were going to give North Dakota State guard Ben Woodside some attention.

In a game that went three overtimes, with Stephen F. Austin prevailing over the Bison, the story is still about Woodside. 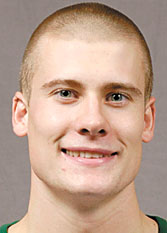 Big Ben did work, but it wasn't flashy. He scored a Summit Conference record 60 points in the loss with exactly half of his point total coming from the free throw line. Yes, that's right, Woodside made 'em pay for those fouls, shooting 30 for 35 from the stripe-- certainly how any unassuming 5' 11" Caucasian guard would dream it up in his head.

Impressive yes, and Woodside is getting shout outs from all the big national outlets today, but we accomplished this sort of feat a number of times growing up.

Nonetheless the 60 stands as the highest point total so far in Division I, and we don't think it will be eclipsed. So most likely, a nice feat for the Bison standout to have claim to when printed in the Final Four media guide come April.