Pac 10 party in the Desert Classic

Share All sharing options for: Pac 10 party in the Desert Classic 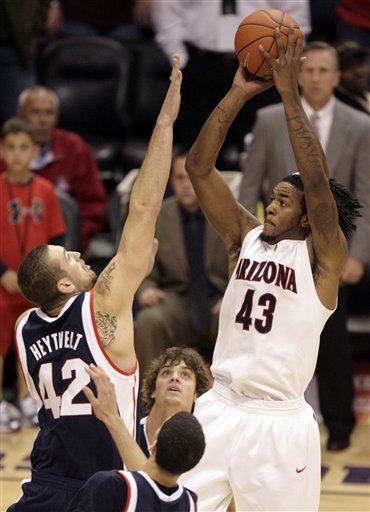 College basketball on a Sunday night often goes unnoticed and we're fairly reluctant to talk about the Desert Classic out in Phoenix, but the results of both games were noteworthy and could serve as indicators looking forward. So dammit we must blog...

Arizona got their first big win in the post Lute Olsen era, handing Gonzaga their first loss of the season, 69-64. The Wildcat junior trio of Nic Wise, Jordan Hill and Chase Budinger combined for 57 points, with Wise making three crucial free throws down the stretch to ensure victory.

We had a hunch that Arizona would fall of the face of earth this season, but here they are at 7-2 (both losses coming by a single point) with a win over the Zags. Wise impressed tonight, looking like the heady-type point guard we are accustomed to seeing at this school. If he can replicate tonight's output throughout the season, he may challenge Darren Collison as the league's top PG...no joke.

Preceding Zona's win, their intrastate rival needed OT to defeat IUPUI . The Sun Devils lone lead was the final score, and James Harden was essentially a non-factor-- scoring only nine points. Instead it was Rihards Kuksiks' six three pointers that got them out of a 16 point hole in the second half. The SFBE jury is still out on this team. Harden is supposed to play the role of unheralded All-American this season, but he's shown to be inconsistent and his team can't be struggling to defeat a school that serves as a crappy satellite campus for both Purdue and Indiana University.