Quickie Recap 12.20: Lesson One in Bracketology

Share All sharing options for: Quickie Recap 12.20: Lesson One in Bracketology

We can learn a lot from Saturday's action. Not all Mormon prayers are answered. Tubby Smith still loves beating Louisville teams. Belmont can hang in there with the best. And the 'Cuse can actually make free throws. 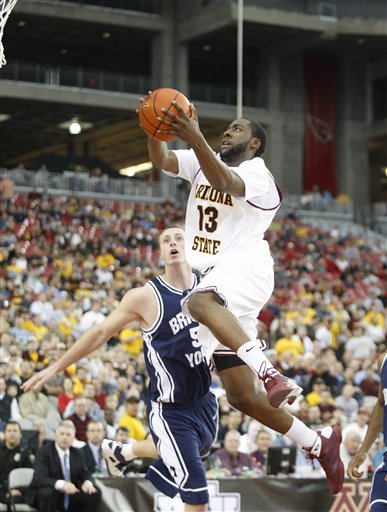 Harden and ASU got the best of the Good ole' Boys...barely

BYU almost got to "touch each other after the buzzer," but when Charles Abouo's bucket to beat the clock was overturned, Arizona State was able to avoid a detrimental loss. BYU lead the whole second half until nine ticks remained when James Harden knocked in his sixteenth "freebie" from the charity stripe to give the Sun Devils the 76-75 edge. Harden finished with 30.

Louisville may not be the team everyone thought they would be at the beginning of the season, falling to the (surprising) undefeated Golden Gophers of Minnesota, 70-64. Tubby Smith still knows how to coach against that other team from Kentucky. Pitino could of blamed a nine minute scoring drought on the bus company neglecting to pick the team up at the airport, but all credit should go to Tubby and his staff. He got the final laugh and his team is now 10-0.

The Bruins from Belmont put a huge scare into Bruce pearl's Tennessee Volunteers, but Tennessee was able to hold on 79-77. The Bruins returned four starters, all seniors, to a team that you remember nearly upset Duke in last years tournament. Belmont got 30 from their slasher Alex Renfroe, and almost had us fooled they were capable of pulling off an upset. Close but not close enough once again, as missed free throws prove costly. Vols win.

Syracuse overcame a wild week in order to pick up a massive "W" at the Pyramid in Memphis, 72-65. With Devo preparing to pick up trash on I-81, the Orange were led by Jonny Flynn's 24 points and 6 assists. Flynn answered every run the Tigers could muster and in the end the Orange overcame their biggest problem this year and knocked down their free throws to seal the deal.