Share All sharing options for: Duke is a top 10 team, Xavier is not 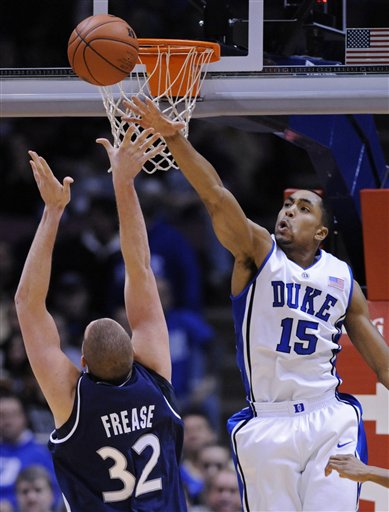 A no-doubter for Henderson & Co.

It was a chance to grab some national attention, silence the haters, and force Dick Vitale to see beyond the BCS schools. But that wishful thinking never materialized, as Xavier was pummled from start to finish by the Dukies in East Rutherford,

It was a made-for-tv match-up--with Duke making one of their regular trips to the Tri-state in order to appease their area alumni--but ended up being one of the most disapointing top 10 games in recent memory. Duke flawlessly capitalized on the Musketeers initial timid and clueless play, jumping out to an 18-1 lead.

John Scheyer got his, in the form of 23 points on 5-7 from deep, and Gerald Henderson added 19. Conversly, Xavier's most noteworthy stat: nine first-half field goals coupled with 10 turnovers. Yikes.

The Meadowlands is clearly a comfortable place for Coach K and his players. Let's not forget his last December game here, in 2005 when an upbeat Texas left bruised and battered by the Blue Devils.

There will be speculation, however, that Xavier suffered from a post-finals week hangover, but that's more of a lame excuse. Frankly, Duke is Duke and Xavier is still just an elite Atlantic 10 team still adjusting their eyes to the bright lights of network television.