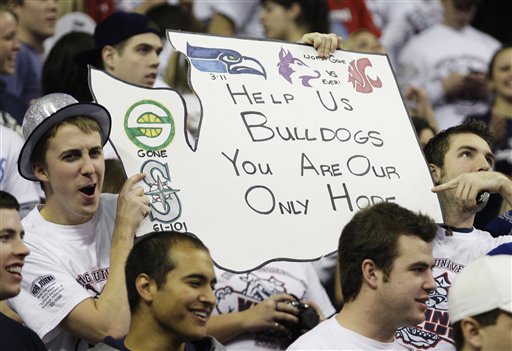 Yeah, you got that right

Are we getting to the point where college basketball can't truly get interesting until Gus Johnson has his first "I CAN'T FEEL MY FACE!!!" call of the season? Johnson's 2008-09 debut was fantastic, as CBS sucessfully placed our favorite color commentator for the most enjoyable game as part of their Super Saturday. UCONN won in a thriller, and Key Arena hosted a worthwhile event--something it doesn't really do anymore.

Gonzaga had this game won but AJ Price wanted to keep playing, hitting an off-balance-no-business-going-in deep ball that sent the game to overtime, where UCONN ultimately cruised.

Today Price left no doubt he's better than your team's point guard, UNC aside. He out shined Jeremy Pargo, with 24 points complimented with 10 assists. As a team, the Huskies ability to take control of the extra session sans Hasheem Thabeet was quite impressive. Throughout the game, Gongaza was apprehensive to attack the basket when the tall Tanzanian was patrolling the low post, but got wide-eyed when Calhoun had to sit him due to foul trouble. We thought his absence would be fatal, but not so.

The Huskies are now unquestionalby the 2nd best team in the nation. Can they just play the Tar Heels now?