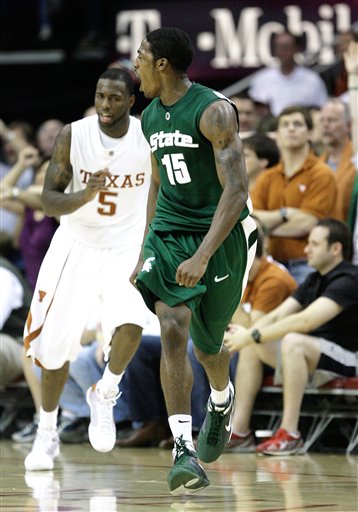 Summers three propelled Mich. St. to a win in Houston

It preempted Duke-Xavier in most markets, and was what a game between two elite teams should look like. Durrell Summers clinched a big win for the Spartans, knocking down a deep ball with 18 seconds left, to secure a victory over Texas.

Goran Suton showed how vital he can serve when healthy, leading his team with 18 points and limiting production from Dexter Pittman. Despite poor play from Aj Abrams (eight points) the Longhorns played well enough to win. We think Abrams should be the fall guy here. He made some questionable decisions down the stretch and is Exhibit A of how a "shoot first" point guard can hinder his team from winning. Isolation and "getting mine" isn't always the answer kid, especially against a Tom Izzo coached team.

The Spartans are now clicking after two ugly early season losses, and should have some renewed confidence heading into conference play. Texas should look to clean up their offense as they prepare for another gritty Big 10 team in Wisconsin.