It's not a secret society, or a group of oil magnates who like to make it rain. And, surprisingly, it's not even a reference to the long list of Shawn Kemp's female friends.

No Club Trillion is none of the above, but it is the newest blog we're reading and it gives a fairly unfiltered view of life from the end of Ohio State's bench.

Hyped by the one-and-only Bill Simmons during a recent podcast, creators Mark Titus and Kyle Madsen, the twelfth and eleventh players, respectively, on the Buckeyes, are chronicling their time this season with the few other insignificant benchwarmers in their attempt to be part of this made-up exclusive club. 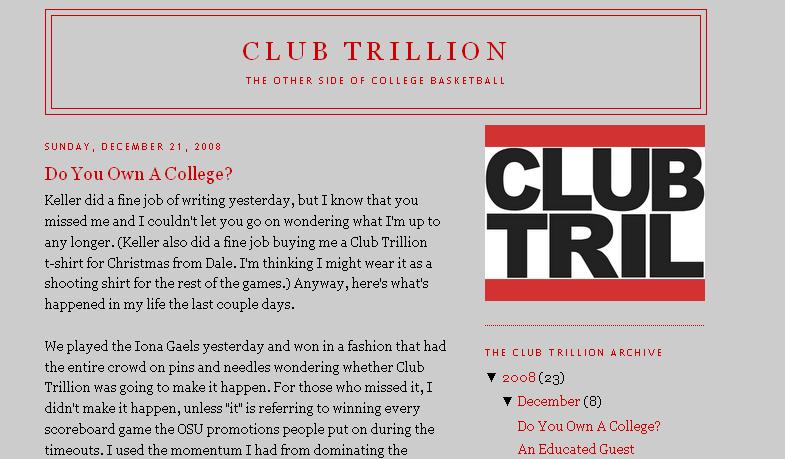 According to Titus on the December 16 edition of the B.S. Report, members must be able to record no more than one minute of play in a game (mop-up duty per the request of Thad Matta) and during their roughly 3-4 trips up and down the court must achieve...nothing. Nothing in the form of no rebounds, no shot makes, and not even a shot attempt. If successful, the box score for that player would read 1-000-000-000-000-- as in one minute played followed by the 12 additional tracked statistics.

Titus noted in his interview with Simmons that Madsen has been starting to see some significant minutes in the rotation due to injury, and his status as a card-carrying member of Club Tril could be in jeopardy.

Titus was also quick to brag to the Sports Guy that he played on the same AAU team as Greg Oden, Mike Conley and Eric Gordon, and was tempted to test the NBA waters with them, but wisely decided against it.