Share All sharing options for: Quickie Recap 12.24: Eggnog weighing some teams down 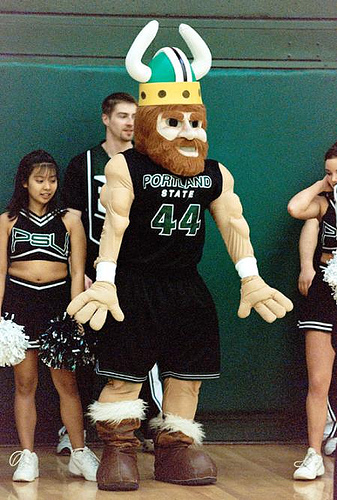 A #16 seed has never beaten a #1 seed in the NCAA tournament, so there's some perspective here on Portland State's win last night over Gonzaga. The Vikings are only 10 months removed from their first NCAA tournament, they were at 16 seed. On the Eve of Christmas Eve, not even a blizzard could stop the Viking's conquest of Spokane to down the #7 Bulldogs-- only the their 3rd loss at home since 2004.

These Vikings were not led by a burly, bearded 6 foot 8 dude. They were led by 5'6" 150 lb. Jeremiah Dominguez and his seven trey bombs. Dominguez was the Big Sky Conference POY last year and teams might want to put him and his team on their radar in order to prevent a bracket buster loss. The Zags can't blame this loss on "being drained from the UCONN game," and all the snow in the world won't cover up this monumental loss. Have fun shoveling.

Another team that will be lacking some holiday cheer is Xavier. After getting trounced by the Dukies on Saturday, the Butler Bulldogs came in and slapped the Muskies around on their own floor, 74 - 65. Butler was lead by a couple of underclassmen, Matt Howard and Gordon Hayward, contributing 19 a piece. After a 9-0 start Xavier has dropped their last two, bringing them back to reality after a deceiving national ranking of seven.

Kansas vs. Arizona. Normally this game would be some "must see TV," but when these two teams got together in Tuscon late Tuesday night it got lost in between the Boise State-TCU game and "A Christmas Story." Both teams came in unranked but with very respectful records, Arizona 7-3 and Kansas 8-2. 'Zona looked good, well at least in the second half. Down 44-35 'Zona came out of the tunnel in the second half and delivered a flurry of knockout punches, in the form of a 29-6 run. Kansas never could claw back, exiting with a 84 - 67 loss.