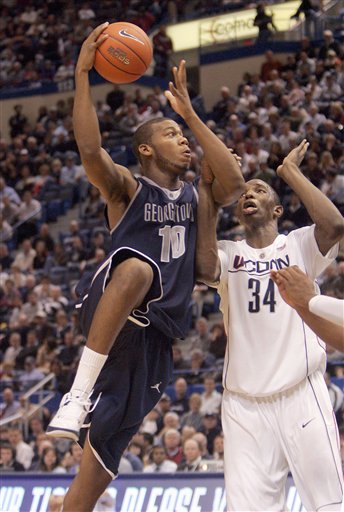 The Class of 2008 is a prime example of why David Stern finally decided to enforce an age requirement in the NBA. If he hadn’t there’s a pretty good chance BJ Mullens would already be a Robert Swift-type enigma or Jrue Holiday would be toiling in the NBDL.

This class has minimal NBA studs, but tonight Georgetown’s Greg Monroe might have established himself as its jewel.

Monroe, Jay Bilas’s new favorite "Long and Active Prospect," dropped 16 and Dajaun Summers led all with 18 in a huge statement victory over UCONN, as the most important conference in college basketball started league play.

The ball was tipped, Jim Calhoun swore seven times, and then suddenly his team was down 15-1. Jerome Dyson played frighteningly awful: four points on 1 of 10 shooting, with the lone field goal coming in mop-up time. Also noteworthy, it was the first time this season the Huskies failed to make more free throws than their opponent even attempted. Quite a feat up until this game.

A tip for everyone: next time you get to play Hasheem Thabeet one-on-one, be sure to up-fake a few times in order to find a clear lane to the basket. Perimeter Defense 101, Thabeet hasn’t taken the class.