Share All sharing options for: Quickie Recap 12.30: Teams trying to make a name 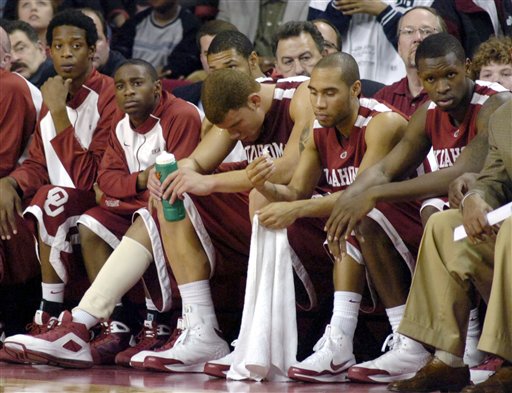 No fun for the Sooners in Fayetteville

The Sooner's were the next of the undefeated to fall on Tuesday night, and the most we could do was check the score when our browser refreshed every 30 seconds. Arkansas jumped on them early, starting the game with a 25-10 lead. The Razorbacks have flown under the radar all year, even with a 10-1 record, but with this win we're sure more than just Corliss Williamson and Bill Clinton will be paying attention to PIG Sooie!!! All teams have to fall at some point, unless you have Argyle on your jersey, so a loss to a 9-1 team isn't the worst way to go down.

Purdue seemed like the "sexy" pick of the year for a lot of people, but now we just want to call them the "Tara Reid All-Stars," after losing to Illinois 71 - 67 on their own hardwood. It took overtime to pull it off but the Fightin' Illini improved to 13-1. The stat of the game was "6": Illinois only committed 6 turnovers, coupled with 21 assists. The Illini, like Arkansas, have been quietly building up force despite being unranked, but today Andy Katz says it's time to give them their due.

Andy "Rainman" Rautins is back at it. After tying a school record with 9 triples last game, Rautins (26 pts) added 7 more on Tuesday night to aid the Orange to a 100 - 76 shooting clinic. The Orange shot 55% from beyond the arc compared to Seton Hall's 7.4% on 2 of 27 (Yes, all schools do TRY and recruit players that can shoot). The 'Cuse also welcomed back Eric Devendorf for their Big East opener to the tune of 20 large.