Glad we don't have to hear that undefeated crap again

Share All sharing options for: Glad we don't have to hear that undefeated crap again 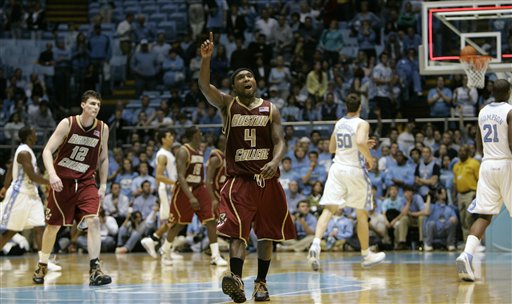 While this will do nothing to inhibit North Carolina from winning their fifth national championship, at least we can sleep easy at night knowing Tyler Hansborough will not be part of something that is "perfection." Boston College did us all a huge favor and shocked the Heels, deflating the egos of all those preppy kids who walk down Franklin Street thinking they're sweet or something.

Tyrese Rice is officially the man, and he's certainly established himself as an absolute UNC Killer, leading all with 25 points and eight assists. After the game he pretty much called out all previous Tar Heels foes, and this cold-blooded mentality earned him a spot on our long list of people we wouldn't pick a fight with.

What's most impressive about the victory is that after exchanging jabs for the first 30 minutes of the game, the Eagles asserted themselves down the stretch, pulling away from the number one, all-world Tar Heels for the victory, even holding a 74-61 lead with 9:24 to play.

Being a road game for BC, the monumental victory didn't really have that feel when the final buzzer sounded. No rushing the court and no mayhem, just some mild hootin' and hollerin' and cordial handshakes between the coaches. It makes us realize how rare the win is, and the difficulty of taking down the top team on their own floor.

So while it will it be short lived and fairly inconsequental in the big picture, the loss means the Tar Heels are technically in last place in the ACC standings. Duke appears to be gelling as a team, blowing out the Hokies tonight at Cameron Indoor. And with Wake Forest still undefeated, everything is now that much more compelling as we move forward.