Share All sharing options for: UCONN and WVU play hockey 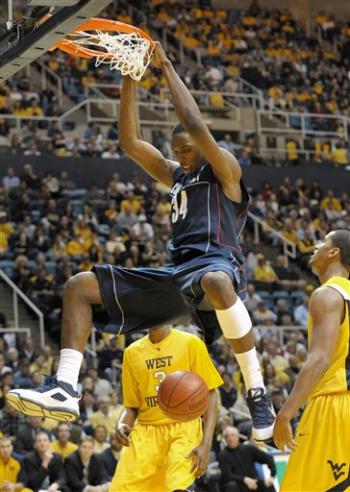 Dunk you very much

Ever seen two guys square up and go punch for punch, taking each respective shot to the lower jaw? Well when UCONN traveled to Morgantown to take on the Mighty Mountaineers of West Virginia that is exactly what happened.

Hasheem Thabeet and Stanley Roberts were throwing the "haymakers" in the form of a combined 28 boards. Thabeet added 13 points and Jeff Adrian poured in 13 of his 17 in the second half and UCONN limped out of Morgantown with a 61-55 victory.

Both teams shot poorly, UCONN at 40% and WVU at an astonishingly awful 30%. No lead ever topped six points, confirming that the Big East is just one giant hockey-style slugfest where you can take nothing for granted.