The NBA is awesome? Baby?

Share All sharing options for: The NBA is awesome? Baby? 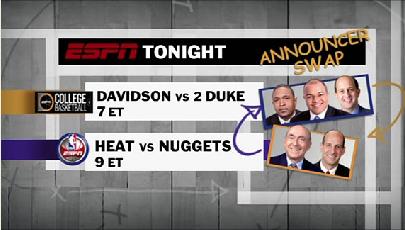 In an intelligent move by ESPN to drum up some interest, we tuned into the unique NCAA/NBA double header and were generally entertained at the dichotomy between the two levels of play and respective announcing crews involved.

At Cameron Indoor, Jeff Van Gundy was astounded that two basketball coaches could tell his players to run an offense for an entire game, Mike Tirico seemed perplexed that a campus could be so bereft of the quintessential college coed, and Mark Jackson had nothing, absolutely nothing, to say.

Davidson got off to a slow start, and didn't seem too interested in actually keeping this game close until about seven minutes left in the game, getting down by 27 at one point. Too late however, as Duke gets another convincing victory. 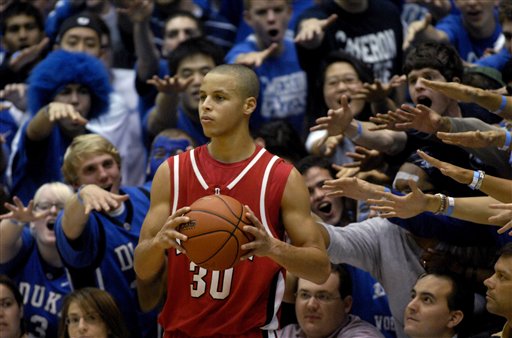 Sixteen turnovers killed the Wildcats, seven coming in the first eight minutes of the game. Steph Curry smugly walked around chewing on his mouthpiece, but his impact was not extraordinary. That said, he still managed to "get his," finishing with 29 points on 10 of 22 shooting. While the ESPN producers pushed the crew to discuss, ad nauseam, Curry's prospects in the NBA, it's clear Van Gundy can't stand college basketball players. He lauded the atmosphere and Duke as a program, but clearly wouldn't draft one of these guys if given the chance...to coach again.

For Duke they're supposed to win games like this, but it was their fifth consecutve convincing victory -- winning by an average of 27.4 points. As Caucasian-laden as they are, the Blue Devils clearly belong in the Final Four equation.

The varsity game featured Dwayne Wade in a uniform, and Carmelo Anthony in a sharp red suede sport coat. Vitale was naturally lively, and seems to do a much better job keeping up on professional basketball then Van Gundy and Jackson do on the interscholastic game. Score and story line don't interest us too much here, as we eventually moved on to round two of Gonzaga - Tennessee.