Wooo! Pig Sooie is for real

Share All sharing options for: Wooo! Pig Sooie is for real 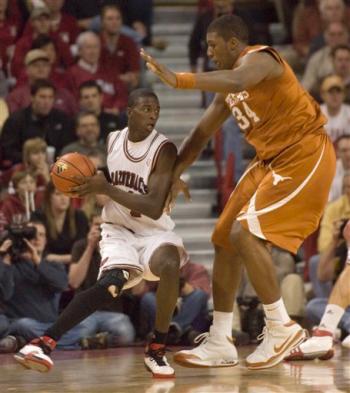 The unranked Razorbacks of Arkansas have done it again. For the second time in one week they have knocked off a top 10 team.

On Tuesday night the Razorbacks took down #7 Texas 67-61. A week earlier they downed a then undefeated #4 Oklahoma. Everyone in the Big 12 is now looking down their schedule to make sure they don't have this SEC team that will be known as the Big 12 Killers. The Razorbacks were led by Michael Washington's 22 points but the real engine that makes this team go is Freshman PG Courtney Fortson, who added 10 rebounds and 5 assists to go with his 13 points.

Yes, we know he has long hair but this kid can play. What is the reason for the 12-1 Razorbacks being unranked? Good question, we don't know either, but we know with their style of play they will always keep a game close (a hint for when you're filling out your brackets in March).