If you ain't a Gator, you're Gator Bait

Share All sharing options for: If you ain't a Gator, you're Gator Bait 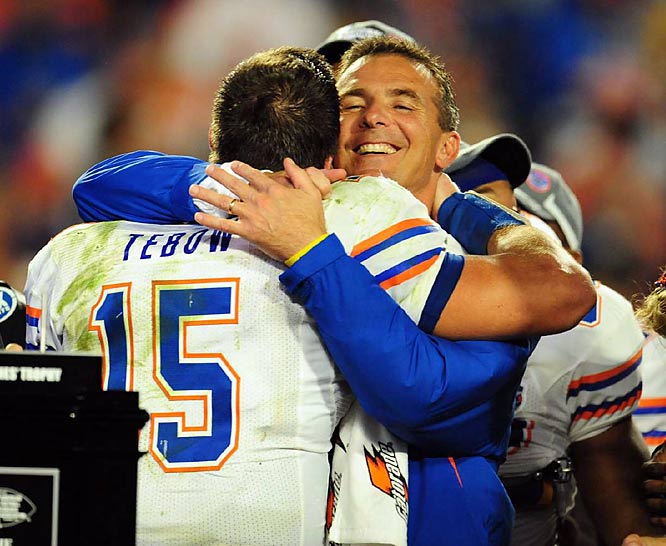 Play Music: I will Always Love You~ Whitney Houston

The Florida Gators are the National Champions. BAAAAAAAH! Dah Na Na Na Na, Go GATORS! Yes, we got sick of hearing that band all night long but we must give the Florida Gators their props. The Gators SEC defense proved to be too tough for the prolific Big 12 offense of Oklahoma, taking home the Sears Trophy with a 24 - 14 victory. The winners exuded confidence from the start, as Urban Meyer paced the sideline with a stoic look, all while Bob Stoops looked like he forgot 100,000 people were going to be in the stadium.

This game was one of the better BCS Championships in recent memory despite being falsely advertised as a shootout style game, of which the over-under hovered around 70. Heisman QB's, Bradford and Tebow each threw 2 first half picks despite only throwing a combined 8 all year long and Oklahoma was held to 14 points after averaging 63 a clip during the regular season.

Tim Tebow shrugged off two first half interceptions, and willed his team to victory, finishing with 231 passing yards, Two TD's. Oh not to mention the 109 yards he reeled off on the ground. Percy Harvin, solidified his draft status with 122 rushing yards on only 9 carries. Oklahoma could have changed the landscape of this game in the first half but a couple of second quarter goal line stands by the Gator defense, left an open stage for Tebow, and of course he capitalized. We should have known Tebow would deliver, after essentially guaranteeing that the Gators would not be stopped for the remainder of the season. Will power.

We know Tebow and his Gators receive a lot of "pub" and most often times to a nauseating extent but when it is all said and done, Tim Tebow might be one of, it not, THE greatest college football player of all time, as his personal destiny has manifested itself right before the country's eyes.

We will be looking forward to next year when Tebow will likely return for his Senior season. We also may get a chance to see Bradford come back as well, due to his sub-par performance on the biggest stage. If that happens, expect next year's preseason rankings to have Florida on top of the list followed by Oklahoma.