Share All sharing options for: Arkansas does a good Boston College impression 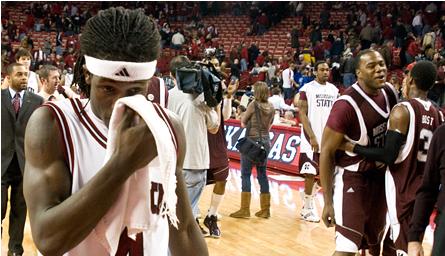 First, we jumped on the BC bandwagon after they walked into Chapel Hill and took down UNC, a team with legitimate thoughts of being the first team to go undefeated since the 1975 Indiana Hoosiers. Then in a not so glorious return home to Chestnut Hill, the Eagles were waxed by intra-city rival Harvard, a program who had NEVER before defeated a ranked team.

Down in the Bible Belt John Pelfrey had Arkansas fans thinking hoops, with consecutive wins over top Big 12 teams Oklahoma and Texas. We bought into Courtney Fortson and Pelfrey's stirring rendition of "Forty Minutes of Hell," but the Razorbacks too are learning about what it takes to truly be a top 25 team. Mississippi State marched into Fayettteville to spoil the SEC opener for the Razorbacks, winning in convincing fashion 70-56. Courtney Forston was held to five points and was a culprit in the dismal perimeter defending, which allowed the Bulldogs to shoot 11-27 from beyond the arc.

Does Arkansas still deserve to be a ranked team? Should BC be included in the same breath as the usual ACC suspects? Both have signature wins to hang their hat on once we start talking bubble teams. But if you can't hold home court over a fairly athletically challenged Harvard, or medicore Mississippi State, you shouldn't be tooting your horn quite yet.