What to make of the Louisville Cardinals

Share All sharing options for: What to make of the Louisville Cardinals 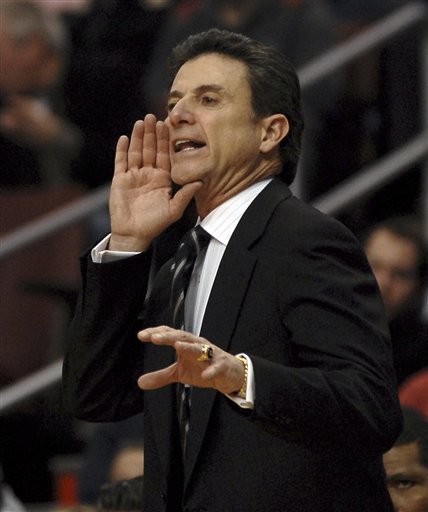 He couldn't manipulate his Celtics players, but Rick Pitino knows how to get through to young college kids

It's been an interesting start to the season for the Louisville Cardinals -- a preseason #3 ranking, lots of hype for forward Terrence Williams, and the hope that Rick Pitino would begin to consistently sport the white chocolate suit. But to date, their 11-3 record has been sprinkled with disappointment and drama. The Cardinals are ranked #21, Terrence Williams is only averaging 11.6 ppg on 39 percent shooting, and we haven't seen that damn suit yet from Pitino.

This week provided some additional angst for UL fans, as we learned that before last Sunday's annual game against Kentucky, Pitino told Edgar Sosa to take a hike, and was sick of watching him play. A mid-season transfer by your (usually) starting point guard is not only rare, it often is a sign that is team is self combusting. Whether Pitino truly meant what he said to the junior guard is undetermined, but it certainly struck a nerve with Sosa and he responded with 18 points, including a late three pointer to seal the win over the Wildcats.

Yesterday, the Cardinals put on a clinic in how to win ugly, manufacturing a road win over Villanova in quite unsightly fashion. Both teams shot under 40 percent and the Cardinals jacked 25 three balls, converting on only three. Pitino said that recently his team had been experiencing bad luck, but today "we had some good luck." Could this be just another psychological attempt at invigorating his troops?

In this no-cupcake Big East, the Cardinals, like everyone, will have numerous chances to get big wins. This week they square off at home against Notre Dame in the official premiere of Big Monday, then have five days to prepare for current top dog Pittsburgh.

Let's not forget last season, as this team didn't really realize its potential until February, and finished one game from the Final Four. We certainly think this team has the parts, and of course the coach to replicate that output again in 2009.