And the Wake is building

Share All sharing options for: And the Wake is building 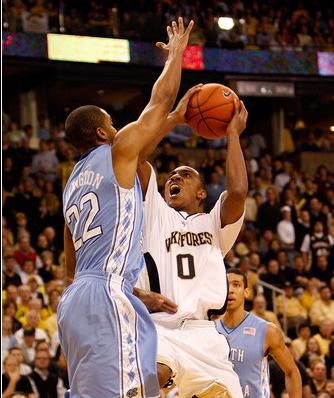 We want to be friends with Jeff Teague

On Sunday night, after digesting some not so exciting NFL football, we began uncontrollably salivating at the Wake Forest - UNC matchup. We kept asking ourselves: Is Jeff Teague and the rest of the Demon Deacons legit? Do we throw a party if UNC goes 0-2 in the ACC? As the game went on it was...is Jeff Teague POY material? And who the EFF is Chas McFarland?

Teague and his cronies proved they are more than just legit, they showed they might be the most entertaining team in all of college basketball, with a 92 - 89 win over the assumed national champs. Our new favorite guard led all with a whopping 34 points, showing the ability to create shots for himself regardless of what defense was thrown at him. Complimenting Teague was the aforementioned Chas. The seven foot center who stole his name from 1992 battled Psycho T all game, and it was highlighted by a coast to coast lay-up we thought would end with Chas face planting under the basket-- only it didn't.

What will this mean to the UNC? Not much...probably, but we said that last Monday when they lost to BC. What's most encouraging here is that the ACC may be more competitive than we had envisioned, and that bodes well for any fan of college basketball.