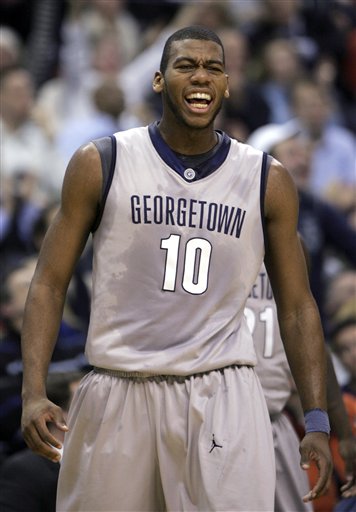 Georgetown led from start to finish, and connected on 12 of 21 three pointers, to hand Syracuse their first conference loss. The Washington Post's Mike Wise writes that the Hoyas "dissected Jim Boeheim's signature zone in an 88-74 win." The Hoyas held a 20 point lead late in the first half, and kept the margin no smaller than eight until the end of the game. Just another day in the Big East.

Here in Boston, it was kind of a like a one-round "We Beat UNC" invitational. Wake Forest showed they're a real contender, while Boston College showed their unexpected win in Chapel Hill was a complete aberration. The Globe's Bob Ryan is wondering if the that win really happened. The Demon Deacons outscored the Eagles by 20 in the first half, and never looked back. Jeff Teague had 29.

Also in the ACC, Duke overcame some rough first half shooting to cruise past Georgia Tech. Depending on how you look at it, both teams still get a win today -- as front and center on the Atlanta Journal Constitution sports page is heralded recruit Derrick Favors sporting a fresh GT hat, as he's officially committed to play for Paul Hewins. Favors has already said he's most likely a one-and-done, and during the game Jay Bilas touched on the lack of a foundation for Tech, as Favors joins a list (Stephon Marbury, Chris Bosh, Thaddeus Young) of blue chippers with no real intentions of building a legacy at the school.

Illinois is quietly putting together a nice season in Champaign. They're 3-1 in the Big 10 and offset their one loss to Meeeeghican with a win last night over the Wolverines. Now they turn their attention to Michigan St. A victory Saturday would be their fourth over a ranked opponent.

Speaking of the Spartans, Penn State chipped a 17 point deficit all the down to one with a minute-thirty remaining, but lost the free throw game-- losing 78-73. A moral victory at best. Nonetheless, it was a great point guard match-up between Kalin Lucas and Taylor Battle, writes Mark Viera of the Detroit Free Press. The sophomore Battle is a tough guard averaging 19 a game. And along with senior scorers Stanley Pringle and Jamelle Cornley, the Nittany Lions could be on the bubble come March.