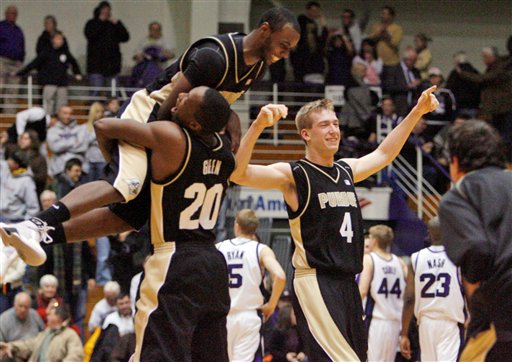 A game that should not have resulted in this picture

How about a round of Boilermakers? some applause for the Boilermakers? Down by eleven with just under eight minutes to go, Purdue rallied to prevent a potential upset by Big 10 dormat Northwestern. JaJuan Johnson was the hero by hitting two free throws with two ticks left on the clock, but he got it twisted. He meant to miss the second of the two to force a long distance heave, the result: an intentionally unintentional bank in, which gave the Wildcats a decent shot at a desperation three ball. Rick Gano of the Indianapolis Star believes the defense of the Boilermakers is what helped them overcome their 22 turnovers. Purdue will now be tested on the road, facing Wisconsin and Minnesota in upcoming games. Mike Greenberg's school drops to 0-4 in the conference.

Moving over to the A-10, the X was able to squeak by Rhody the Ram 67-65. This game was ugly on both ends, with multiple series of turnover...fast-break...turnover...fast-break. A vicious cycle. Dante Jackson gave X the lead for good with 1:30 left , moving them to 14-2 on the year. Paul Kenyon of the Providence Journal says the Rams are living a real life version of the movie "Groundhog Day." Xavier should walk all over La Salle and St. Bonaventure before making their trip to the Bayou to take on LSU, who is undefeated at home this year.

Over in Madison, it took extra time for the Tubby Smith's Golden Gophers to put away Da Badgers of Wisconsin. After forcing OT with a long range bomb with two seconds left, Lawrence Westbrook reeled off 9 of the Gophers 16 points in OT to secure the win. Mark Stewart of the Milwaukee Journal Sentinel quotes Wisconsin coach Bo Ryan saying "the Badgers wilted under the pressure." Yep, Bo knows wilting. The Golden Gophers are quietly making some noise at 16-1 and walking into The Barn is no easy task.