Share All sharing options for: ACC tops the Big East 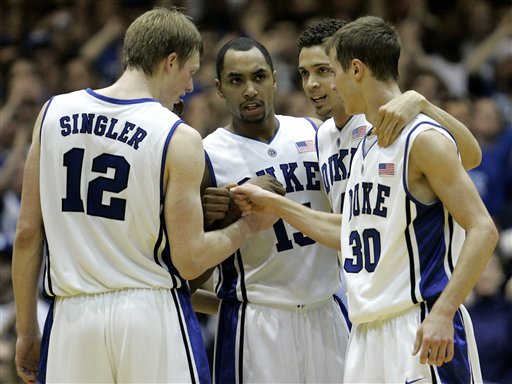 Yeah, their togetherness pisses us off too

And so it begins...the debate for best conference. All along the east coast the debate for strongest conference has been fairly hostile among ACC supporters and Big East supporters. Before the season almost 100% of college basketball fans believed the Big East was the beast of the east but with team's like Wake Forest, Clemson, Duke and UNC posting up in the Top 10 at the mid season mark, the argument gets a little hazy.

Saturday afternoon a lot of arguments got a little more heated when Georgetown, coming off an impressive home victory over Syracuse earlier that week, traveled into the Cameron Crazy Kingdom to take on the Dukies. Earlier in the week, even Coach K got into the mix, proclaiming that the ACC is better than the Big East. Well, his team responded, defeating the G'town Hoyas 76-67. The game remained tight until Duke went on an 11-0 run to finish the final 4:38 of the first half. Duke seemed to have it in cruise control for the remainder of the game. The debate will finally be settled in March when the dust settles and one by one teams are eliminated.