Share All sharing options for: Searching For: Kevin Pittsnogle 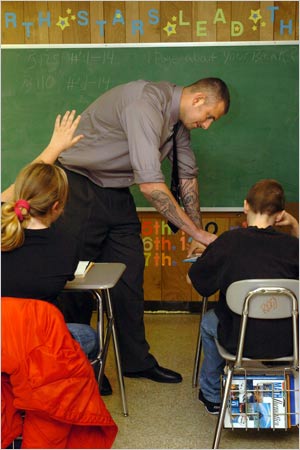 He's not your average middle-school teacher

Only two full seasons removed from the college basketball spotlight, Kevin Pittsnogle has returned to his hometown of Martinsburg. He's a regular guy-- a middle school teacher and unpaid assistant basketball coach. The New York Times' John Branch updates us on the former WVU oddity, who is living in a double wide with his wife, contemplating his next attempt at professional basketball.

Frankly we couldn't stand Pittsnogle during his glory days. This is due in large part to his atrocious last name and the fact he looked more like a ratly mountaineer than a basketball player. The article portrays Pittsnogle as a likebale guy however, and we're willing to give him a pass as he seeks to carve out his future.