All is well in the Steel City

Share All sharing options for: All is well in the Steel City 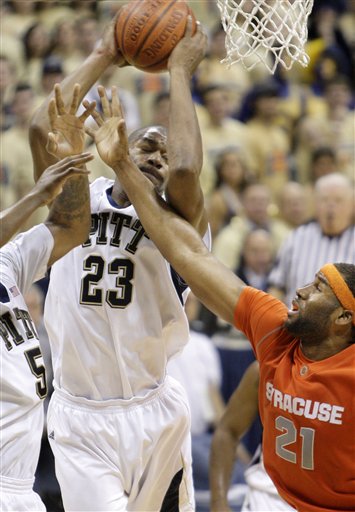 We don't have any desire to live in Pittsburgh, but it's certainly not a bad time for residents there to "rep yo' city."

With Big Ben Roethlisberger and Santonio Holmes in attendance, the Panthers recovered from Saturday's loss to Louisville, getting a good looking win over Syracuse. Sam Young scored 19 of his 22 points in the second half, as Pitt employed brute strength and ran away with this one, writes Bud Poliquin of the Syracuse Post-Standard.

Bill Raftery, Jay Bilas and Sean McDonough exchanged friendly jabs throughout, and were briefly joined by Steve Andress, a 'Cuse broadcasting student (probably part of the quasi-elitist "Newhouse School") as part of their Campus Connection week.

The match-up we were following during the game: Levance Fields vs. Jonny Flynn. Two top guards with different styles of play. Fields wins the battle and the war here-- as he was much more effective from the field (7-11 for 15 points) than his counterpart (Flynn was a dismal 3-14, getting 6 of his 12 points at the free throw line).

Elsewhere in the Big East, Providence holds firm over Cincinnati. For what it's worth, the Friars are solidifying themselves as the ninth best team in the conference and appear on track to receive an at-large bid.