Let's not protect our house

Share All sharing options for: Let's not protect our house 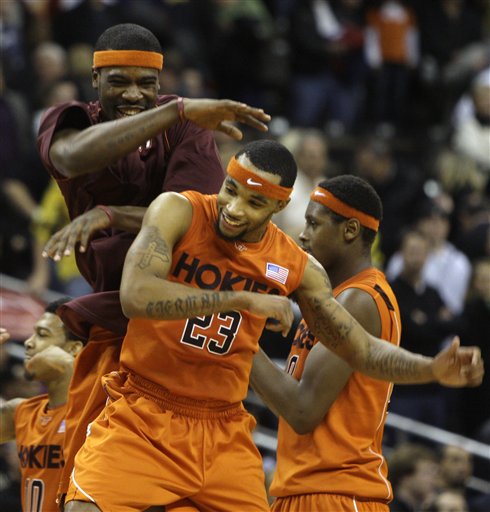 Chest bumps are free, VT can party like a Rockstar

Not a good night to be wearing the home threads. Wednesday night we saw two top 10 teams go down in their own gym, including current top dawg Wake Forest. The Demon Deacons appeared disinterested in actually maintaining their #1 ranking, and were pounded by Virginia Tech. Jeff Teague, who we tagged as ACC POY earlier this week, pitched a tent and posted up camp beyond the 3 point line when his team was down in the final minutes. This kid could be the salesman for those knives that cut through phonebooks with the way he can slash through defenses off the dribble, but his nonchalant attitude towards the end made us question his determination. Dan Collins of the Winston Salem Journal reports that even Wake's own James Johnson questions the Demon Deacon's desire. Combine the POY statue with the four bulldozer charges in the final minutes and Wake pretty much handed the game to the Hokies. An ugly win, but a win it was and Seth Greenberg walked off the court as fast as he could, like he stole something.

Despite missing four consecutive free throws with just under two minutes to play (Big Ten Punchline), Northwestern got their first win in East Lansing since the Reagan administration. Led by a spastic 6'8" Kevin Coble and his 31 points, the Wildcats put together their second straight conference win 70-67. The loss by the Spartans was their first loss at home in 28 games, third longest streak running in NCAA Basketball. According to Shannon Shelton at the Detroit Free Press, Tom Izzo knew that this day was a foregone conclusion.