Share All sharing options for: Next time, face guard! 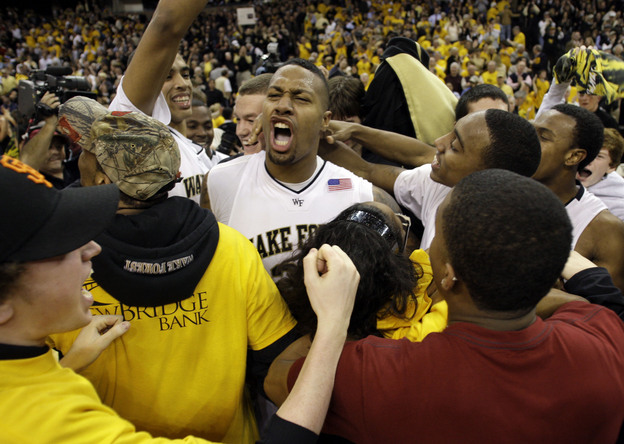 It always blows our mind when we see a player or team disregard fundamentals, emit a brain-fart, then subsequently lose based on that breakdown.

Tonight Gerald Henderson--after hitting very Kobe-like mid range jumper that tied the game in the final seconds--forgot about the Cardinal rule of defense: stay BETWEEN your man and the ball. This forgetfulness allowed Demon Deacons forward James Johnson to slip to the basket for an easy lay-in, giving Wake Forest a 70-68 win with just 0.8 seconds remaining.

After the game the Blue Devils seemed to play the "well...what ha..what happened was..." card and said they are taught to switch on all-screens, and weren't sure what went wrong. That's probably the right approach, and it will be interesting to see how Coach K covers up this mishap. Bottom line, they lost because they effed up.

What's overlooked in all this is that Wake Forest looked like the better team tonight, frankly, playing great defense that resulted in 10 steals and nine blocks. They may have let a 13 point lead slip away, but they were clearly superior down low, and hindered the Blue Devils from behind the arc (where they were 4 of 22), something we know they are highly reliant on.

So Duke's view from the top will last just as long as the team able to dethrone them, and have now lost in five of their last six visits to Winston-Salem.