Share All sharing options for: Louisville be DOIN! people 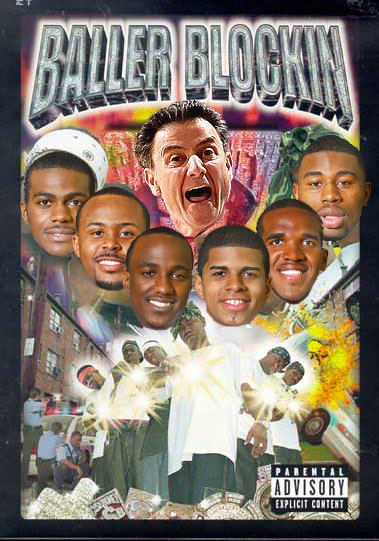 They currently sit atop Ken Pomeroy's defense efficiency ratings, are 8-0 in the Big East, and have toppled they're last nine opponents with impressive wins over Pittsburgh, Syracuse and today at home against West Virginia.

Rick Pitino's crew have bounced back in impressive fashion, after a mediocre start that was highlighted by a double-digit loss to Western Kentucky and word that Edgar Sosa was boiling his coach's blood so much, Pitino wanted him to leave the team and transfer.

Times have changed, and Louisville is now the hottest team in the country. This afternoon, the Cards jumped out to a 45-25 halftime lead. They only ended up winning by six, and committed a gross 26 turnovers, but remain the only undefeated team in the BE, and are now looking forward to a Monday showdown in Freedom Hall against the presumed #1 UCONN Huskies. A victory here would mean the Cardinals second win over a top-ranked team, and added viablility for a coveted number one seed come March...although it is early.