UCONN takes a Husky on the Cards

Share All sharing options for: UCONN takes a Husky on the Cards 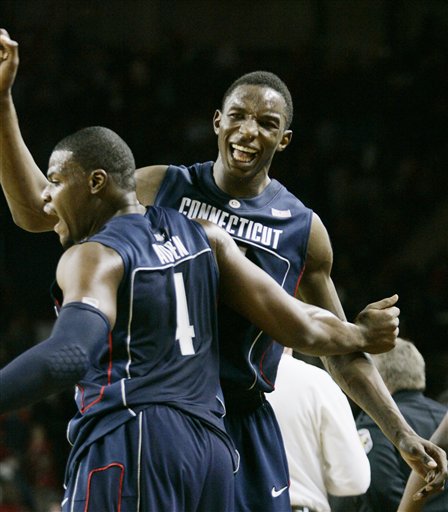 UCONN took over as the top dawg in the NC2A on Monday. Coincidently HUSKY NATION! was slated to test that #1 spot right away. Now the test sounded daunting... on the road, versus arguably the hottest team in the nation, the #7 Louisville Cardinals. The game brewed with anticipation and hype. Would the #1 team only relish in the ironic glory of the top spot for less than 24 hours?

No. That did not happen. However, Jim Calhoun did get his own version of "Seven Minutes in Heaven," at Rick Pitino's expense. Louisville jumped out to a 14-9 lead in the first 5 minutes but then went scoreless for seven minutes. That allowed the Huskies to climb back into it, taking a 28-26 lead. Then came the under 4 minutes-TV Timeout. This is where it got interesting.

"Round, round, round...I get around!" What the hell target audience is ESPN going after? Louisville could have used some of that freedom and mobility, as the Cards did not score for the final 5:12 of the first half. HAHA, over 12 minutes of scoreless basketball. That is not the only astonishingly awful statistic for the Louisville Cardinals...2...two free throw attempts, two free throw makes (100%, yes, go ahead and celebrate that). With a 38-26 lead at halftime, the UConn Huskies would extend and keep the lead at a comfortable 10 to 15 points before closing it out for the 68-51 victory. Mike Anthony of the Hartford Courant tells us, "Louisville fans began leaving with a just under four minutes remaining." UConn was led by Jeff Adrien's 18 points.

If we were Louisville, we would blame the Hoveround and their "free in-home-test-drive." Sadly, that was the most entertaining 2 minutes of the broadcast.