A night of revelation

Share All sharing options for: A night of revelation 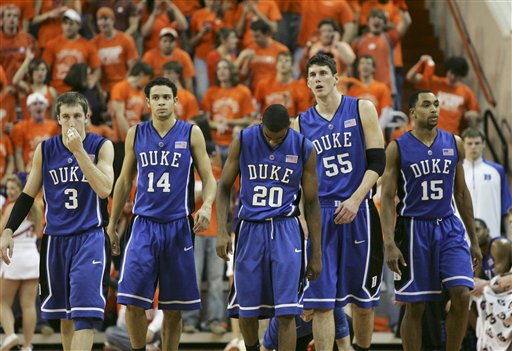 One of us loves dejected photos of the Dorks from Durham, the other weeps

Monday, March 16th, 2009 will not be any normal Monday. On that particular morning, after you tap into that free coffee that tastes like muddy water, you will collect your 5 brackets from the printer. Instead of analyzing financial reports, government projects, or whatever garbage occupies the morning hours of your day, there will be brackets to browse. This year we recommend taking a different approach, by just freakin' guessing.

There's been talk about a pattern of incongruities (can you say that?) throughout this season, with team's not being able to "find" themselves. Last night's slate of games pretty much sold us on that school of thought. Syracuse started all the action with a response victory that had Syracuse fan's thinking of Eric Devendorf as a Catholic Alter Boy. Jeff Diveronica of the Rochester Democrat & Chronicle referred to the 'Cuse as a "boxer on the ropes." Syracuse's beat down of the Mountaineers helped Jim Boeheim and the Orange out of the corner they were backed into, losing three of their last four.

Wake Forest, everyone's favorite big game team got waxed on the road by the 'Canes, 79 -52. The end result: The 'Canes snap a three game losing streak and sending Wake to their second straight loss, both to an unranked club. Manny Navarro of the Miami Herald called the 'Canes victory, "the perfect remedy." That's now three ACC road losses for the Demon Deacons. Will Wake's fate be a loss to a 14 seed?

Halftime Score: Michigan State 42, Minnesota 16...Game Recap done. The #19 Golden Gophers came into The House that Izzo Built after building a 18-3 record on the year. However, the Spartans defended Sparta from warm ups on, jumping out to an impressive halftime lead. Durrell Summers dropped in 21 on only 10 shots compared to the entire Minnesota starting lineup's 19 on 27 shots. Myron Medcalf of the Minneapolis Star called the Gophers debacle "an identity crisis." He's probably right, but let's not forget the Spartans lost both games to Penn State this year.

Two weeks ago Clemson was downed by the very same Wake Forest team that was previously mentioned. One week ago Wake eeked out a squeaker over the then #1 Duke Blue Devils. We saw a completely different Tigers team when Duke rolled in last night. The swarming press of the Tigers made Greg Paulus, Brian Soubek and the rest of the Dookies cough it up more than a pediatrician conducting back to school physical exams. Clemson was able to pour it on, handing the Blue Devils their worst loss since 1990, a 27 point mauling 74-47. Clemson did not let the lead drop below 20 points over the final 9 minutes. Ron Green Jr. of the Charlotte Observer reports that even Clemson Coach, Oliver Perry was surprised by margin of their victory. Clemson might be a National Contender after all.

Notre Dame came into the season as one of the Big East favorites and a Top 10 ranking. How the mighty have fallen, losing to Cincinnati on Monday night. Notre Dame drops its SIXTH straight loss and Mike Brey still think "The beat goes on baby," reports Joe Kay of the Chicago Tribune. Notre Dame is now on the outside of the bubble looking in at teams like Providence, Cincinnati and WVU.

The one certainty from tonight: Heather Cox should not be in HD.