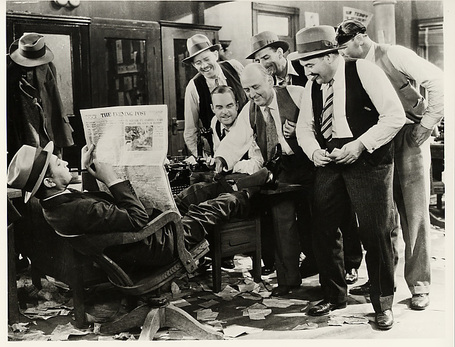 To close out our Preseason Q&A series, we have the magnificent Luke Winn of Sports Illustrated (or SI.com for those who helped make "print versions" a thing of the past). Over the summer, Luke crossed paths with some Polygamists while minding his own business enjoying ice cream in Utah. Just yesterday he released this season's first Power Rankings. Plenty more college basketball talk below.

Where could we find you this summer? On the beach, on the golf course, or in a gym filled with DI prospects? I mixed it up. I was at the USA Basketball trials in Colorado Springs in June. That was for the Under-19 and the World University Games teams; the guys who left the biggest impressions there were Butler's Gordon Hayward, Ole Miss' Terrico White, and Kansas' Tyshawn Taylor. All three should be breakout stars this year. (As long as Taylor recovers from this dislocated thumb, that is.)

In July I hit the Reebok All-America camp in Philly, and after that I moved off of basketball and worked on a magazine story on baseball cards, or specifically how Ken Griffey Jr.'s '89 Upper Deck rookie is the last iconic baseball card. I'm a big baseball fan on the side, so it's nice to dabble in baseball writing at least once a summer.

I went camping in Utah, and at a rural Dairy Queen there, got to see a polygamist farmer (or maybe rancher?) walk in with his four wives. That real-life Big Love moment was probably more eye-opening than learning about Terrico White.

Quickly, your reflections on last year. Was a talent-limited NBA draft just proof that the 2008-2009 college basketball season lacked excitement and raw talent? The draft was an indictment on the poor freshman class. After Tyreke Evans -- who only became good later in the season -- there really weren't any major impact freshmen. The next three taken were DeMar DeRozan, Jrue Holiday and B.J. Mullens, none of whom left any kind of imprint on the college game. Another problem that contributed to a down season was that the nation's power was almost too concentrated in the Big East. That made for amazing Big East games ... but it was almost like the SEC, Pac-10 and Big Ten were afterthoughts.

There seems to still be a gray area as to what defines a "mid-major." In the hierarchy of college basketball, at what program do you draw the line? I subscribe to (Kyle) Whelliston's Red Line theory, even if there are A-10 teams that don't want to be lumped into that category. I should disclose that there's presently a Bally on my bookshelf.

OK, focusing on 2009-2010, what is the best conference in the land? It looks as though the Big East won't be king this season. I think the Big East has three preseason top-10 teams, but you're right -- the league isn't going to put the rest of college hoops to shame this season. The Big Ten might actually be the deepest conference. Michigan State is a title contender, Purdue is a Final Four possibility if everyone's healthy, and Ohio State, Michigan, Illinois, Wisconsin, Penn State and even Northwestern will chase NCAA bids. For the sake of its national rep, though, the Big Ten needs some legitimate non-conference wins next year. Its rep was essentially ruined last season after UNC killed Michigan State and Duke killed Purdue and Wisconsin.

What do you expect from Kentucky? How many years until they play for a national title? And, when his tenure is over, will John Calipari leave the program in good hands, or in disarray like Memphis and UMASS? Kentucky is in more of a right-now situation than a building situation. Its three best players, John Wall, Patrick Patterson and DeMarcus Cousins (in that order) are probably gone after this season, so this could be one of Cal's best chances of chasing a title. I kind of expect them to start slow, while everyone meshes, and then be pretty dangerous in March. As for Calipari, I wonder if he might actually defy the odds and not leave Kentucky in trouble with the NCAA. You need to take fewer risks to get major recruits to come to Kentucky, as opposed to say, luring a future No. 1 draft pick to the Conference USA.

What would you like to see the NCAA implement/change/get rid of, to better the overall product of college basketball? Loosen restrictions on offseason workouts. The limits put on coaches' interaction with players prior to Midnight Madness are excessive. Give them more time, and you'll get a better product. The reason elite Europeans don't even consider coming over here isn't just money -- it's also because they can get an unlimited amount of skill development in the club setting.

Your premature surprise team of the season…I think there's a chance Cincinnati could be nationally relevant again -- and a legit team in the Big East -- with its trio of Deonta Vaughn, Yancy Gates and Lance Stephenson. Of course, Stephenson still has to be cleared by the NCAA, and of course, since it's Stephenson, things could also go horribly wrong. But I think the kid is driven, and could make a huge impact if he's OK'd to play.

Your premature Final Four picks…I have to save these for SI.com's preview (sorry!). But I will say I think UConn is being overlooked in plenty of the preseason polls that are coming out. I'm seriously considering them as a Final Four team in 2010.

Because of the name of our blog, we ask all journalists who come on here and give us the time of day to name their favorite forgotten college basketball player. Name a few of your favorites who never established themselves at the next level. I grew up going to Wisconsin games with my dad, and I remember being fascinated with Duany Duany, a Sudanese forward who played for Dick Bennett. That's still probably the greatest name in the history of Badgers basketball. Another guy who I followed was Sam Okey (please, please click this link), a McDonald's All-American who went to UW, transferred to Iowa and then sort of flamed out. He was an absolute legend in Wisconsin high school basketball, a 6-8 (or around there) athletic white kid who played in a tiny division. It was unfair for the opposition -- almost like Kevin Garnett being unleashed on a JCC middle school team.

Finish this sentence: I like using twitter because...Umm ... I'm not sure if I like it yet. I like that the players I'm following are largely unfiltered, but I'm disappointed that 95 percent of their tweets reveal nothing. It's one area where college hoopsters need to step up their game.