Share All sharing options for: Your obligatory Pac 10 primer 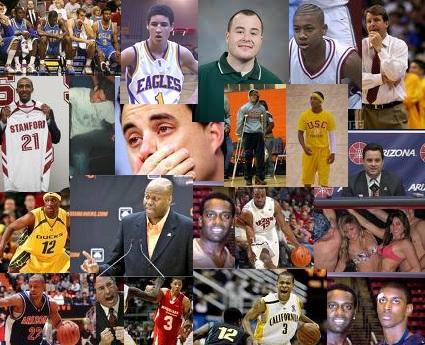 With all the familiar faces that were part of three consecutive Final Four trips from 2006-2008, the UCLA Renaissance Era currently sits in flux and Pac 10 supremacy is now up for grabs.

Who wants it? California has a quartet of seniors looking to grab the first conference title for the Golden Bears since 1960 - way back when Pete Newell was the face of the program. They're nice, and one of the more intriguing teams given their expectations coupled with their mediocre status for so long. Washington boasts one of the country's most likable players ironically named after one of the most evil figures in basketball. How far can 5'8" Isaiah Thomas take the Huskies? Lorenzo Romar's bunch are guard heavy but its a nice mix of youth and experience.

One other shift in the conference landscape are three new coaches manning the sidelines. Two, Sean Miller of Arizona and Kevin O'Neill of USC (Ken Bone of Wazzu is the third) are huge additions, for better or worse, and could serve as moves that significantly alter the identity of their respective programs for quite a long time.

With all that, it probably doesn't need to be argued that this is the worst of the six BCS conferences this season.

Most overrated - This conference. Problems at Arizona.