Share All sharing options for: Your obligatory Big 12 Primer 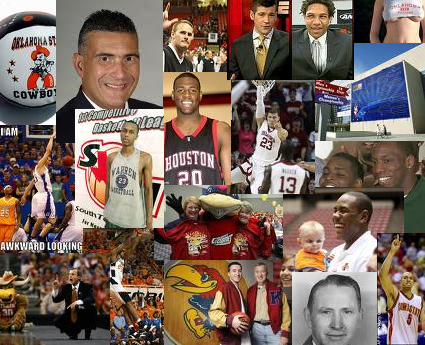 It's not a groundbreaking fact, but still worth noting: when you look at the last three #1 and #2 NBA Draft picks, three have come from the Big 12. Yes, that's Kevin Durant, Michael Beasley and Blake Griffin. This year, there may not be a top pick in waiting, but the conference boasts 8-10 players that could all go in the first round next summer. Lucky for Kansas they have three of those players and one of them (Xavier Henry) will have to fight just to see 20 minutes of floor time each game.

The most intriguing player in the conference though is Iowa State's Craig Brackins, someone who sort of became a household name at the unlikeliest of times. Stuck in Ames, Iowa, the forward's 20 and 10 output didn't seem to garner the attention that it deserved. Instead, it took a spot on Team USA for the World University Games in June and dissuasion from his mother to go pro that put him in a position to polish his game, potentially win this year's Big 12 POY award, and assure himself of a top 5 draft position.

Texas might have their best team in history. You know about Damion James and you know about Avery Bradley. But don't forget about Jai Lucas. Texas has a real point guard now who can also score when needed.

Also don't forget about James Anderson, Dennis Clemente, LaceDarius Dunn, JT Tiller and Mike Singletary. Get it? There's a ton of talent in this league.

Our breakdown is after the jump.

Most underrated - Longhorn 3pt and free-throw woes, the recruiting pipeline between Manhattan, Kansas and the Baltimore/Washington, D.C. area