Bob Knight is so over you, Hoosiers

Share All sharing options for: Bob Knight is so over you, Hoosiers 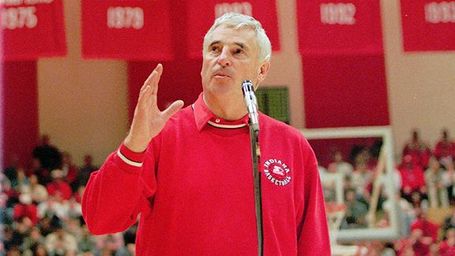 You know you're living in a new era of media when Dick Vitale is not only active on twitter, but also breaking news via the social networking site.  According to @dickiev, Robert Montgomery Knight will decline an opportunity to be formally inducted into the Indiana Hoosier Hall of Fame next week.

Bob Knight will not take a dime from the boosters for what he felt was an injustice involving the suit with ex asst Ron Felling.

Just found out bob knight will not be going to Hoosier HoF.

Knight wasn't really expected to attend the November 7th induction (to be held at halftime of the Wisconsin vs. Indiana football game), but there's that sub-plot about Hoosier boosters seeking to bury the hatchet on that whole Ron Felling ordeal with a few rounds of Boilermakers cool $75k paid to Knight. Bobby isn't biting of course, exclaiming he never took money from the boosters while he coached there so why start now.

We give a tip of the cap to Knight. The way he was thrown out by the late Myles Brand left him foaming at the mouth. The Hoosiers neglected to defend the school's most recognizable figure so now their stuck, with all due respect here, inducting Jerry Yeagley, Steve Downing, Katrin Koch, Joe Norman, the family of late Mike Rabold, and Alan Somers sans Knight. None of which carry any weight for a national audience.