Share All sharing options for: Know your March Madness Spoilers 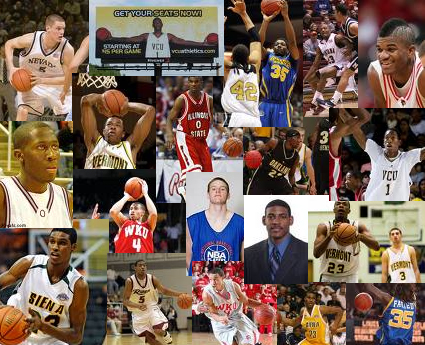 Joe Lunardi resurfaced today on ESPN.com, and he wasn't kind to the little guy. This year, according to the original Bracketologist, only Xavier will qualify as a non-BCS, at-large tournament team. It's sad to think, but maybe true.  I say we blame the economy!

Despite this sobering news, below are 10 players we reccommend you at least take heed of, so you're not Googling them when Greg Gumbel is singing their praises after an incredible first round upset in March.

Luke Babbitt; Sophomore, Nevada - So you're a McDonalds All-American and receive offers from nearly every Pac 10 school, Ohio State and Gonzaga...what do you do? Well, if you're Luke Babbitt, you stay close to home and go to Nevada. After initially committing to play for Thad Matta, Babbitt got cold feet and decided he wanted to remain near his parents.  He's a pro prospect, but playing in a lesser conference seems to put more pressure on the sophomore, who will be expected to be great for the entire season, turn his "Freshman of the Year" award into "Player of the Year" and build upon his 17/7.3/1.3 stat line.

Marqus Blakely; Senior, Vermont - OK let's get this out of the way...America East is one of the least basketball-centric conferences in the country, so when a player catches our eye, he must be impressive. Blakely is a two-time American East player of the year and is going to have quite a burden on his shoulders, as the Catamounts graduated 35 percent of their scoring and it's all time assists leader Miki Trimboli. But at 6'5" 235, Blakely is an explosive scoring threat, and a feared shot blocker who probably will lead his team in all major categories.

Osiris Eldridge; Senior, Illinois State - Finishing a close third to Siena's Just-in'love Smith and Cal's Bak Bak, Eldridge holds claim to one of the baddest names in the college game. Last season ended on a sour note for Eldridge, as he missed a three pointer that would have forced a second overtime against Northern Iowa in the Missouri Valley Tourney Final.  Expect the Redbirds to be matched-up against  the Panthers once again when the precious NCAA Tournament berth is on the line. Also please take note of his nicely maintained Euro-hawk.

Kenneth Faried; Junior, Morehead State - Quick, who was second in the NCAA last season in double-doubles? No idiot, it wasn't Eric Devendorf, this title belongs to Faried, a New Jersey native who migrated to eastern Kentucky to serve as one of the most imposing players in Ohio Valley Conference. This guy probably plays harder, meaner and faster than any of his opponents, and just may be the country's most prolific rebounder by the end of this season.

Paul George; Sophomore, Fresno State - Come March, George's time as 'just a nice mid-major player' will likely be long gone. After a surprise freshman season (averaging 14 and 6) George often executes foolish dunks, strokes at a 45 percent clip from behind the arc, and is a legit NBA prospect drawing comparisons to Rudy Gay. Yeah, many BCS-schools are kicking themselves for missing this one.

Anthony Johnson; Senior, Montana - In his first season playing DI basketball as a JuCo transfer, Johnson lit up the Big Sky last year putting up scoring numbers not seen by the conference since Rodney Stuckey was killin it at Eastern Washington. Johnson is the reigning conference POY and as a 6'3" wing player, is very efficient . He shoots at 50 percent from the field and 34.5 percent from long range.

Johnathan Jones; Senior, Oakland - Last season's NCAA leader in assists, Jones dropped double-digit dimes (now there's some alliteration) in nine of the Grizzlies last 12 games. Starting every game since he's been on campus, and the only player to ever chalk up 1000 points and 500 assists in a career, Jones has already earned the title as the program's most decorated player. And with that darling Ben Woodside of North Dakota State moving on, Oakland is the favorite to win the Summit league as Jones will enjoy dishing out to three other returning starters all season long.

Larry Sanders; Junior, Virginia Commonwealth - No Eric Maynor, no Anthony Grant, no problem! The 6'10" junior who shares the same name as Gary Shandling's hit HBO show is still here! Sanders has a freakish 91 inch wingspan, and was 11th in the country last season in blocks. While it's quite rare in college basketball, Sanders will be a triple-double threat this season if CAA players repeatedly try and shoot over this guy. NBA scouts like him, but will love him if he develops are more consistent offensive game this season.  Nonetheless, first year coach Shaka Smith has a real asset in his frontcourt.

A.J. Slaughter; Senior, Western Kentucky - He's still eligible? That's right, after two years of playing along side Courtney Lee, Tyrone Brazelton and Orlando Mendez-Valdez, Slaughter is still kicking around and arguably the top player in the Sun Belt. Along with Steffphon Pettigrew, Slaughter will lead a team that returns four starters and itching to get back to the dance after being on the wrong side of one of last season's plays of the year.

Edwin Ubiles; Senior, Siena - For what it's worth, Edwin Ubiles has won more NCAA Tournament games than recent college basketball notables Nick Calathes, Eric Gordon, and Greg Monroe combined. After a dramatic victory over Ohio State last season, Siena comes in this season as the trendy mid-major looking to be a Top 25 mainstay this season- and Ubiles will be the man to lead them. Georgia Tech aside, the Saints schedule is pretty benign, so the selection committee will leave little wiggle room for this program to be an at-large bid candidate. Ubiles' athleticism is on par with the top players in the country, and if he develops any sort of outside game he could be an NBA draft pick.