Share All sharing options for: Your obligatory Big East primer 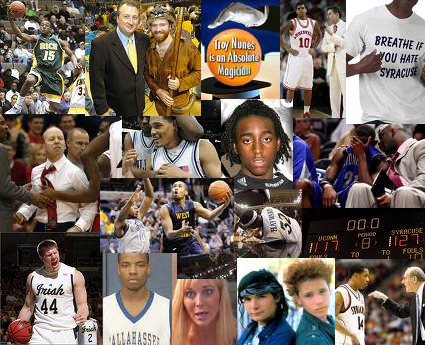 Based on last year's Conference RPI ratings, the Big East finished fourth overall. But when you put two teams in the Final Four (Nova, UCONN), another two in the Elite Eight (Louisville, Pitt), have the top overall team coming into the tournament (Louisville again), and host one of the greatest games of attrition in college basketball history (Cuse-UCONN), you shouldn't let Jerry Palm and the like tell you otherwise. Common sense whispered in my ear and said this was the best conference in college basketball last season. It's odd though...seven months removed from that epic season,  the Big East isn't facing as much of a hangover as you would expect.

West Virginia will be a lot of fun to watch. Devin Ebanks and Da'Sean Butler know how to score on their own terms, and Bob Huggins knows how to win...on his own terms.

Villanova is going to run, and run until their opponent concedes defeat. They have a great balance of experience and young guns in Maalik Wayns and Dominic Cheek. The majority of their rotation will consist of guards, but I have always been a believer that having talented guards is remarkably more important in college basketball than having a solid front court.

UCONN is UCONN. They remain freakishly athletic, and you can't blindly discount a Jim Calhoun team until they prove their mediocrity on the court.

Syracuse loses 55 percent of their scoring but will ease into the season with their, as expected, paltry non-conference schedule (Colgate and Cornell and Columbia!!!). Oh Jim Boeheim you're so wise. Meanwhile, Eric Devendorf and Paul Harris will get to watch all of this from afar, wondering what was in that sticky stuff they smoked last spring, which told them to "go pro."

And of course there's still Luke Harangody, who is bound to break at least a few scoring records this season and is a leading candidate for all those national player of the year awards.

Yup, the Big East is still our favorite conference. So much so that even your dreadful Providence-Depaul match-up is something we can stand to watch.

A breakdown is after the jump.

Cincinnati. Has Mick Cronin finally turned the corner? He has three scoring threats in Deonta Vaughn, Yancy Gates and Lance Stevenson. The Bearcats may breakout this season.

Guard U. How will Jay Wright handle a team that has three bonafide guards, two elite incoming guards, and a Reggie Redding who is suspended for the fall semester but will spend most of his time on the wing once he returns.

Luke Harangody. For the few who play fantasy college basketball, he's your number one pick. With transfer Scott Martin tearing his ACL last month, the Irish are now even that much thinner. Gody currently ranks 8th on the programs all-time scoring list, and if he just replicates his 23.3 ppg output from last season, he will supplant Austin Carr as the most prolific scorer in Irish history.

Louisville. How do they hold up now that they are down this season and their in-state counterparts have catapulted back into the Final Four picture?

Depaul. Do they win a Big East game this season? They're 2-28 in their last 30 Big East regular season games dating back to January 2008.