What I learned from "Without Bias" ... not a whole lot

Share All sharing options for: What I learned from "Without Bias" ... not a whole lot 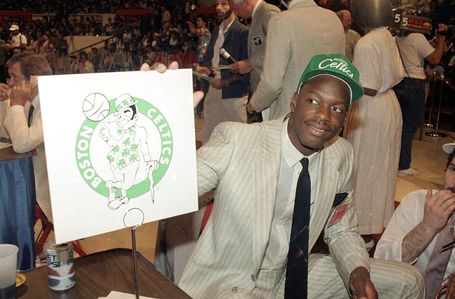 The idea of ESPN's 30 for 30 leaves me giddy:  Thirty sports-related documentaries from a wide range of accomplished film makers chosen to probe a particular story or event that occurred during the 30 years of the worldwide leaders existence. Sold.

Tonight we were treated to "Without Bias," from Kirk Fraser who produced a shorter, more condensed piece for ESPN. Fraser had originally been working on a longer feature film that gained attention for being marketed heavily at the 2008 Sundance Film Festival.

Despite being only an hour, I was convinced that this would be the defining piece that shed light not only on the unknowns of this tragedy, but also something that could enlighten the 18-25 year-olds who never fully understood the talent Bias had on the court, and the enormity of his death.

Unfortunately when the doc faded to black, I sat disappointed. Fraser was given incredible access to the Bias family and Len's former Terrapin teammates. But with that, viewers weren't really given a detailed account as to what happened in Washington Hall on June 19, 1986, the drug use among Bias' peers and the drug use of Bias himself. While you can't assume Len had problems with drugs and alcohol, it wasn't really proven otherwise.

My thoughts were validated with a review from The Baltimore Sun's David Zurawi,who shared my sentiments.

And that is what "Without Bias" comes down to in the end: an "effort" to determine what happened - not any kind of convincing determination. Like so many before him, Fraser ends up with a raft of unanswered questions. Bias' girlfriend says she never saw him use drugs, while the classmate who was with him in the room and was ultimately acquitted on four cocaine charges says today that he and Bias had used cocaine before.

Sadly there's more that could have been provided, more revelations that need to materialize.  My father always told me that we may never know what really happened to Len Bias. After tonight, I still don't.