Share All sharing options for: Searching For: Julius Page 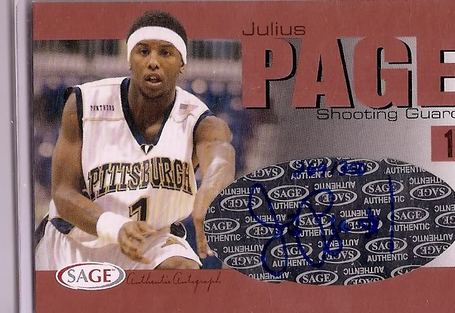 During a recent informal reunion with high school friends, a reminiscence of one of those youthful innocence road trips became a topic of conversation. The event: first NCAA Tournament without the supervision of parents.  The weekend was a mix of fast food, P-Funk All-Stars and BL smoothies, with a side dish of six first and second round games in the Boston Garden (we refuse to acknowledge all that Fleet, TD Bank non-sense). Placed adjacent to a crow's nest, our assigned seats left us feeling insulted and we were brave enough to haggle Tom Coverdale's parents for their loge seats as the rest of his extended family mourned the conclusion of Tom's career.

Somewhere though, in the mix of this debacle, our quasi member of the Oakland Zoo took it upon himself to trigger a "Juuuuuuuulius Page!" [clap, clap, clap] chant while exiting North Station. Was it earth-shattering? Absolutely not. But it was garnering attention, and when you're 17 and galvanizing 20- and 21-year-old undergrads to follow along, you feel pretty damn good about yourself. Since then, Page has remained a common thread amongst our friendship.

Page was a member of the Pittsburgh Panthers basketball team from 2000-2004.  During this tenure, the Panthers notched 107 victories, the most in school history, and earned three Sweet Sixteen appearances.  Page played an integral piece of the puzzle for the Panthers alongside fellow forgotten players like Ontario Lett, Chevon Troutman, and Carl Krauser.  His reliability on defense and consistency on offense allowed him to be a four year starter, and he currently ranks currently 12th on the all-time school scoring list with 1,512 points.  During Julius' senior season he was hampered by an ankle injury that nagged him all year long, which is probably why NBA scouts never gave him a chance. Like all of our "Searching For" players, Page bounced around various European leagues, and also in the Dominican Republic before an injury ultimately sidelined him or sparked a fire in this history major turned entrepreneur.

Derek Zoolander focused on academia when he opened "The Derek Zoolander Center For Kids Who Can't Read Good and Wanna Go Other Stuff Good Too," and Page has mimicked that concept in the world of fitness with his "Just Play 24/7 Fitness Centers."  Page brings the vague and half interested attitude towards working out. His vision includes opening a chain of fitness clubs that feature basketball courts, rock walls, batting cages and even a log flume!  Well, I made that last part up, but you get the idea.  Page was a skinny guy at Pittsburgh and it now finally clicks; it was because of his disdain taste for the conventional fitness methods of lifting weights and running that turned him on to this more unique approach. Currently, he's seeking investors for his concept club, which will still house the normal amenities of your local workout facility, but financial support seems to be limited at this time. We think those Yinzer's put down the Permanti's sandwich and start supporting his cause.

Also, teen drinking is very bad.  We don't condone it.