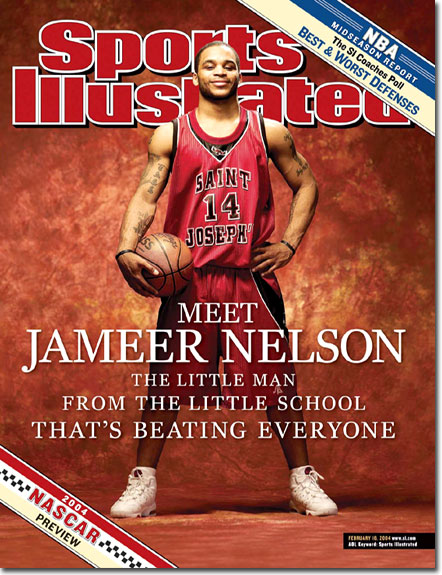 I am always fascinated by the head coach of an overachieving team. How does George Mason's Jim Larranaga, thrust from obscurity into the Final Four, remain so composed and project to the media in a way that convinces us he knows exactly how to handle his new found fame? This also applies to Stan Heath when he led Kent State to the 2002 Elite Eight, Bruce Pearl in 2005 when he was coaching Wisconsin-Milwaukee and, of course, St. Joseph's Phil Martelli during his near unblemished 2003-2004 season.

Entering the year, the Hawks were expected to impress. They were clear-cut Atlantic 10 favorites, and the most likely non-BCS program leave an imprint during March Madness. But nobody was anticipating them to run the table up through the regular season, boast the best backcourt in the country, and even secure Jameer Nelson on the cover of Sports Illustrated in one of the more indelible photos of a college basketball player.

Tipping off the season at Madison Square Garden, opening as the 17th ranked team in the country, the Hawks began the season with an impressive win against Gonzaga.  From there additional non-conference victories came against Boston College and Pacific, and they even traveled out west to top the Cal Golden Bears. When the calendar year turned, Phil Martelli was at the helm of a top 10 ranked team that also boasted the top RPI ranking in the country.

Martelli, you remember, doubled as a PR guru for his Hawks. At every turn (sorry it isn't really documented on YouTube) it seemed his mug was being prominently broadcast on television, making a case for his kids as he looked to ensure that nobody was ignoring the small Jesuit school nestled outside downtown Philadelphia. He even went to bat with Billy Packer, that damn curmudgeon, after the former CBS analyst belittled mid-majors and declared they were polluting the field of 65. Martelli verbally spared with him for a few minutes on Selection Sunday and seemed to come away victorious.

The roster was not as top heavy as you may first suspect. In addition to Nelson, who had the ball in his hands an astounding 31 percent of the time when he was on the court, Delonte West and Pat Carroll were equally important to the team's success. West, much like his NBA game, was never overly impressive but served as a great second, or even bailout option for Nelson. Carroll, one of the sharpest long-range shooters of his time, finished 10th in the country with a 45.8 3-point shooting percentage. He was also probably told not to move inside the line however, as he only attempted 29 free throws that season! There was also Dwayne Jones, a near seven-footer who clogged the lane, and bit player Chet Stachitas who was really smart and had a really sweet name.

The Hawks ended the regular season undefeated with a #1 ranking nationally and a #1 seed in the East Region. Nelson won a bevy of national player of the year awards, Martelli was National Coach of the year, and they had the world by the balls. But after an unexpected loss (a blowout really) to Xavier in the A-10 Conference Tournament, many wondered if the Hawks could navigate through a bracket and make a deep tournament run.

They were capable, marching through to the Elite Eight to face the more physical Oklahoma State Cowboys. In a game that went back and forth for 40 minutes, the Hawks sustained a fatal blow with just seven seconds left, as John Lucas III hit a three to give the Cowboys the lead. Nelson hastily took it upon himself to win the game, but missed short as the buzzer sounded. In disbelief he fell to the floor, unable to digest the finality of one of college basketball's most memorable and unprobable season-long performances.