Presbyterian loves getting smacked around

Share All sharing options for: Presbyterian loves getting smacked around 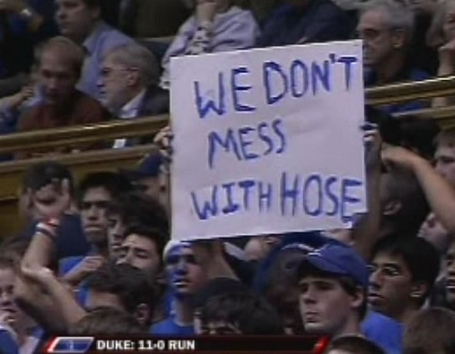 While their non-conference strength of schedule doesn't quite indicate it, the Presbyterian Blue Hose are currently in the midst of a stretch of basketball that is notably difficult and overwhelming, and they like it that way.

As a mediocre team in the Big South, head coach Gregg Nibert thinks he's one tough cookie. To date, the Hose have faced four nationally ranked squads, including last night's 30 point loss to Ohio State. Their average margin of defeat: 39.5 points. I'd love to say they boast more moral victories then anyone in the country, but this team is barely even competing. Expect more lopsided losses to close out the year, as the team ends 2009 with road games against Dayton, Marquette and Florida -- all likely to have their named called on Selection Sunday.

The road warrior label is really all the program prides itself on. To promote their promotion from Division II to Division I  the Hose played 25 road games during the 2007-2008 season, as documented by ESPN.com's Kieran Darcy. They lost every single game.

It's tough to support such nonsense. What has this athletic program gained besides cash and a few cute feature stories? They're like the losing boxer in a prize fight: bloody, cut-up, but happy to accept their payout.

As they await 2012, the first season they become eligible for post season play, 55 percent of their scoring from last season has voluntarily decided to redshirt in order to give the program their best team when it counts. Despite this, I feel they are simply trying  to find one way to engross the college basketball world, teetering on embarrassment while doing so.