Share All sharing options for: 10 from the 00s: The rise (and fire) of Gus Johnson 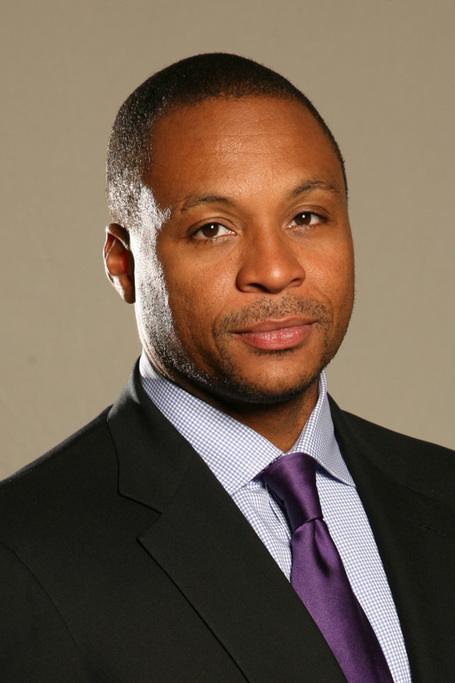 During my senior year at Xavier University, one of the country's great Jesuit higher-education institutions, the Musketeers second round match-up in the 2007 NCAA Tournament against heavily favored Ohio State was one that I will never forget...although parts of it I don't quite remember. Not only did I watch with about 40 of my closest friends, all hoping for the best while expecting the worst, but we sat cramped together in a small living room. It was all part of the St. Patrick's Day festivities.

The game itself should have finished as one of the greatest wins in Xavier's history. Instead they fumbled and lost the lead down the stretch, losing in overtime. Did it suck to watch such an egregious effort of poor clock and game management, along with a few clutch Ron Lewis threes and Greg Oden shoves? Yes. But was that gut-wrenching feeling mitigated because my school's missed opportunity for a trip to the Sweet 16 came over the exuberant voice of Gus Johnson? Yes. Thirty-nine kids in that room left distraught, I just enjoyed the moment.

Ask the right demographic, and you'll find that not only is Gus Johnson perceived as one of the great purveyors of fantastic color commentary, he's as crucial a cog in the Field of 65 as the upset-minded 12 seed.

Gus is a YouTube sensation. In 2005 he called the first and only Vermont Catamounts NCAA Tournament victory. He also spazed out last season when AJ Price tied Gonzaga in a regular season game, made an "inhuman" noise as UCLA ended Adam Morrison's college career in 2006 and, just to show us he's versatile behind the mic, nearly went into cardiac arrest when the Denver Broncos wide receiver Brandon Stokley made one of the most improbable plays of this NFL season.

The last time I checked, calls by Craig Bolerjack are not on YouTube.

While ESPN's Bill Simmons rarely dabbles in basketball of the college kind, he did offer this great graf on Gus a few years ago, as part of a column that seemed to signal the beginning of Johnson's rise to power.

The Gus Johnson Question has turned into one of the defining sports questions in life. Where you stand says more about you than you'd think, just like it's telling if you hated "Field of Dreams" or started rooting for Duke during the early '90s because you liked watching Christian Laettner and Bobby Hurley. If somebody tells me they don't like Gus, I'm not even sure how to react. They might as well tell me, "Yeah, sometimes I like to save dogs from the pound, then murder them with my bare hands."

So whether it's "Rise and Fire," "Oh. My. Goodness," or just a string of inaudible noises used to describe mass hysteria, watching a Gus Johnson game means praying for a close one replete with a fantastic crescendo of emotions right up to the final buzzer. All from the most likable announcer of the decade.