In need of a little help for the new year

Share All sharing options for: In need of a little help for the new year 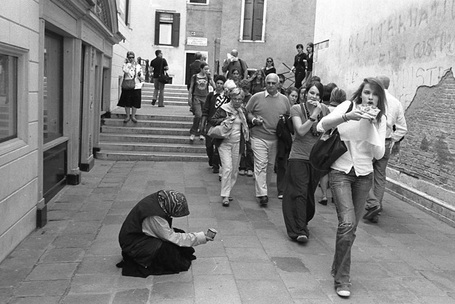 During my family's trip abroad to celebrate the birth of Christ and enjoy some finely fermented champagne straight from the French region it's named after, I was constantly approached and pestered by a single group of people rarely seen stateside: the gypsies.

Not necessarily the nomadic Romani people of Hindu origin, but rather the beggars who look to trick tourists by diverting attention while their young children use quick hands and attempt to snatch wallets full of euros, digital cameras and IPods. I've seen the movie Borat. I know their tricks.

It got me thinking, as we head into conference play, what league, team and player in college basketball is most desperate for attention?

The Atlantic 10 - Desperate for: Some love! Finally, the mid-major conference who cringes at the thought of being labeled a mid-major conference has picked up some key non-conference victories that should carry the league to a RPI ranking no lower than #6 come Selection Sunday. With their current #1 ranked SOS, the A-10 has responded nicely to the ample opportunities given to them to date. Temple has wins over Villanova and Seton Hall; Richmond, a trendy pick, beat Florida in the Sunshine State; Rhode Island only has one loss, a two-point heartbreaker to Virginia Commonwealth; Charlotte got a convincing road win against Louisville; and St. frieken Bonaventure is a respectable 6-5.  It's all setting up for a 1998-like season, when the conference sent five teams dancing.

California - Desperate for: A healthy Theo Robertson. There was a lot of chatter on Mike Montgomery's kids coming into the season, but to date the Golden Bears have posted a pedestrian 6-4 record with their best win coming over Iowa State. We all know the Pac-10 is historically weak this season, so opportunities for a signature win really don't exist at this point in time. Cal boasts a nice starting five with Robertson, who is averaging 14 and 7 since returning from a shin injury. Furthermore they are  #11th in Ken Pomeroy's rankings, so maybe their overall performance to date isn't indicative of this team's potential. Now their objective should be to improve upon last season's 11-7 conference record, win three of four games against the Washington schools and limit their hiccups against lesser competition.

Luke Harangody - Desperate for: Nationally televised games. Entering last season as a top 10 team, the Fighting Irish got plenty of attention and national coverage. This season, while Luke Harangody moves towards becoming the most prolific scorer in school history, those of us who didn't throw down for Full Court haven't been able to watch the lovable Luke. Did you know he's fifth in the country in both scoring and rebounding, as part of the 4th most efficient offense in the country? The 2010 POY needs your praise! Big Monday can't come soon enough.